A spring greens inspired menu plan with spinach, chard, and arugula all featured for those with a green-heavy CSA. Plus, a bit of Irish holdover. 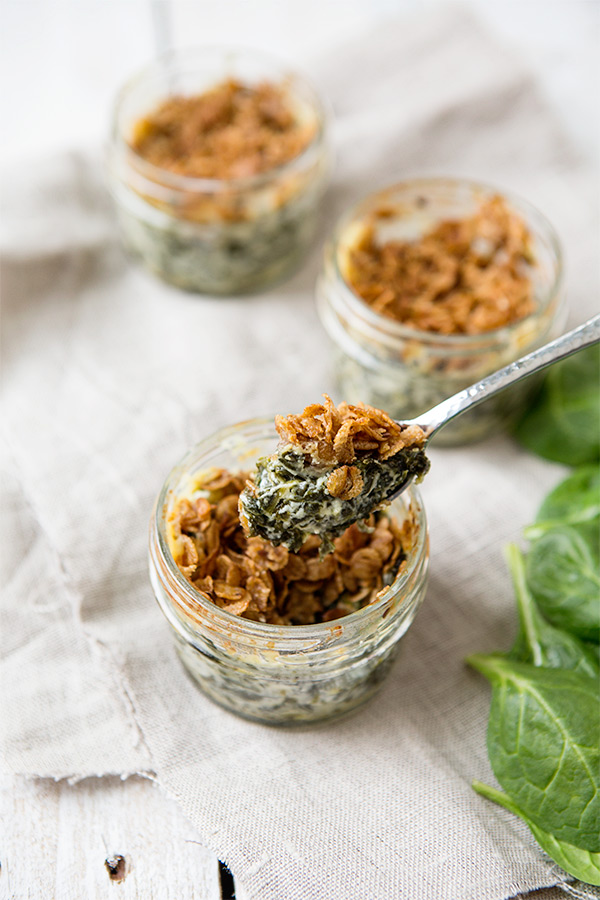 Get the recipe for creamed spinach cups over on the Attune Foods blog
My hands were cold, so I made a cup of rooibos tea. An influx of rooibos in my cupboard collected from sample packs correlates to diligently making an effort to enjoy the red tea, but I can’t help but feeling as though I’m downing a steaming hot cup of Robitussin each time I try. My nose deceives me, associating the subtle fruit and sweet earthy scent to the bottle of red goo that was administered when I was a child sick with a cough or cold. So the red-tinged tea stares up at me from the cup, unloved as of yet.
I discarded my hooded sweatshirt for a larger one belonging to my husband, one he’s had longer than he has had me, with our last name emblazoned down the arm. Our kids are in bed, readying themselves for the first day back after spring break, all except for my 8-year-old, who is enjoying a last-minute night run with dad on the hill in the cold, boots strapped to his snowboard, ears glowing the bright red of Rudolph’s nose. I’m focusing on ignoring the snow that has started drifting down outside the picture window to my left and trying to conjure up an image of dinners for the week.
Spring officially begins this week, and CSA shares start to arrive packed with greens: chard, spinach, arugula, and more. While we won’t be seeing a CSA share or the opening of the farmers market for a few months yet, this menu is dedicated to those not dealing with a fresh blanket of snow today and begins with Creamed Spinach Cups (pictured above) that I made for Attune Foods.
The rooibos is growing on me.
Monday – Roast Chicken with Creamed Spinach and Honey-Glazed Carrots
Tuesday – Creamy Macaroni and Cheese with Leftover Corned Beef Egg Rolls
Wednesday – Bean and Barley Arugula Salad
Thursday – Garlicky White Bean Soup with Chicken and Chard
Friday – Spinach Quiche

1. Once you’re finished eating your chicken on Monday, immediately simmer the bones for stock and cut up the leftovers for the soup on Wednesday.
2. Spinach cups can be prepped a day ahead and stored in the refrigerator until baking. They get the cereal topping and then set on sheet pan before being baked.
3. If prepping the beans yourself, make extra beans for both the salad and soup at the same time.
4. Cheese for the macaroni and cheese and Friday’s quiche should be grated at the same time. Just refrigerate the portion for the quiche in an airtight container.

Did you know: I’m an Attune Foods Brand Ambassador.