Okay, so heavy whipping cream may not be what you’re thinking when you the words “dinner,” “staple,” or “versatile menu item” run through your head. However, luxurious cream flowed freely this week. (It’s all about moderation and pairing with healthy options here at Chez O.)
The heavy whipping cream love affair started with a trip to a tequila bar with the neighbors, a glass of sangria and one physical education teacher requesting I make him “the best cheesecake ever.” That cheesecake was Junior’s, of course. If you’ve been to New York, you know that everyone will tell you Junior’s is the place to go for cheesecake, as Shawn informed me. Several times.
A true cheesecake lover myself, I was willing to give the Junior’s recipe a go. I committed to the cheesecake. (Look at the beautiful cracks.) 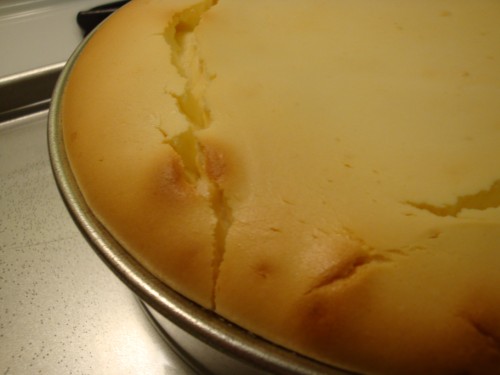 Hello, cheesecake! Junior’s has a fairly involved cheesecake recipe that, among other things, calls for heavy whipping cream. Now, being that I was gifting away a good portion of cheesecake and also wanted to have some for myself, I made two cheesecakes. Yes, two. Very large cheesecakes.

Here’s how we used it all:

1. Broiled cod with white sauce
We’ve been eating a lot of salmon lately, and this was the perfect excuse to prepare another variety of fish. I’ll be telling you exactly what we did soon.
2. Beer Cheese Soup
We made this for the soup swap and extended it to make cheesy rice as a side dish accompanying the tenderloin Ole shared.
3. Cornbread with Slaw Dogs
The cornbread was delicious, and it will be used next week to make cornbread stuffing, and we’ll use those leftovers to top a casserole to put in the freezer for a night down the road. (More on this later.)
4. Seafood pasta with portabella and tomato cream sauce
For this, we took the leftover cream sauce from the broiled cod and added onions, sauteed portabella mushrooms, tomatoes, shrimp and scallops and tossed it with fettuccine.

5. Baked/Shirred Eggs
These are easy, and they taste wonderful. I have a thing for breakfast, I’ll admit, and this is one of the easiest ways to get a hot breakfast to the table without a lot of prep work, and everyone just has that one tiny dish to wash instead of plates and skillets and bowls from scrambling. Plus, you get herbed eggs out of the deal. Did I mention not having to wash the scrambled egg pan with all the seemingly glued on egg film? I hate that.