Mention the word salmon to most people and they will most likely have a polarized reaction.  Either they hate it or they love it.  I have been in the lover’s camp for as long as I can remember.  The same holds true for the rest of The O6 (that’s what I call my family).

Usually, once someone sides with the haters it’s a lifelong commitment, but I’m here to tell you that there is hope.  Case in point: a former roommate of mine, who also ranked in the top five “pickiest eaters I know” category, managed to avoid this fish for the first 28 years of his life.  Then during an evening out, I was shocked to see that he had ordered and was indeed eating salmon.  Not only that, but salmon like I had never seen before.  It was served sizzling on a cedar board and the combination of sight, sound and smell drew the attention of everyone between the kitchen door and our table.  He had made the miraculous transformation from hater to lover.

Some might think that such a production is best handled by the food service professionals, but nothing could be farther from the truth.  Since I have been preparing it for my bunch, I have found that it is actually one of the easiest and most savory ways to cook salmon.

I had held off trying it at home for a few years mostly because of cedar plank sticker shock.  Most places wanted $8 to $12 dollars for a two pack, and that is just too much to spend for a disposable cooking vessel.  I know some of you are saying that they are reusable, and you are right, the thicker ones are, but I don’t have the space to mess around with storing a greasy, charred piece of wood for six months between uses.

The solution to my problem came in the form of my wife, who can remember the tiniest detail for much longer than is healthy.  Last year she returned from a trip to Costco with an unexpected gift for me, a set of six cedar grilling planks.  Just as I was about to comment on the unnecessary expenditure I was pleasantly surprised with her next statement – they only cost eight dollars.  That sealed the deal.  They were large enough (16″ by 7″) but thin enough to make them cheap and disposable.

We eat a lot of salmon but I only use this method every four months or so.  That way it doesn’t get redundant.  Last week we had one of those rare cedar plank salmon experiences so I will share it with you.

Your cooking time and seasoning amounts will be totally dependent on the size of your salmon fillet but I’ll approximate enough to justify calling this a recipe.  If possible use fresh herbs in larger amounts, but around here, the fresh stuff is hard to come by in March.

1 large salmon fillet about 3 or 4 lbs

The juice of ½ lemon

Get your plank good and wet, soak it for a half hour, or run water over it for a few minutes if you don’t have time to soak.

Mix all the dry ingredients.

Pat the plank dry and apply half of the lemon juice directly to the plank with a brush.

Sprinkle about half of the spice mix onto the plank. 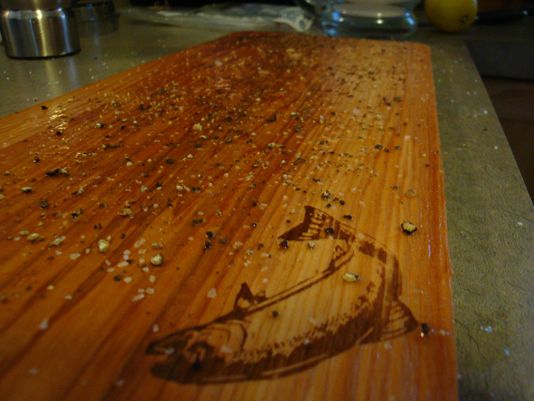 Position your rinsed salmon fillet in the center of the plank.

Top with remaining lemon juice followed by the rest of the spice mix.

Set it in the middle of your grill and turn the heat down to med/low.

Close the lid and walk away. Fight the urge to peek for at least the first 12-14 minutes.

When you think it’s done, peel back one of the lemons in the middle and split it open with a fork. You are looking for just a hint of rare meat on the inside. Once you have found this, turn off the grill and close the lid. Go set the table or open another beer, just do something to give the fish a few minutes to set up a bit.

Bring the dish to the table as is, charred plank and all. Serving off of a very aromatic bit of wood brings an added level of presentation to the finished product.

Just be sure to use an old hot pad or two underneath, the bottom will be black and somewhat messy.

Now get out there and turn some haters into lovers.