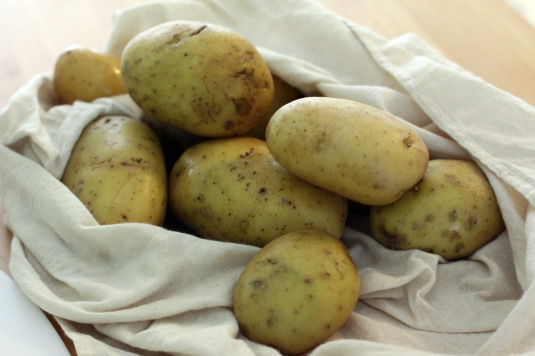 Today, the sun is shining. The icicles that adorned my house have all melted. The snow that covered my backyard? Well, it’s still there, but the forecast says it won’t be there forever, which is how I felt about it last week at this time. Yet the nights still dip below freezing, and I find myself curled up under an afghan my mom crocheted 13 years ago. To chase out the last days of winter, comfort food seems appropriate. Bring on the potatoes, the cream, the oven and the leeks. Don’t forget the leeks.
Start by thinly slicing about two and a half pounds of rinsed and scrubbed Yukon Gold potatoes. Don’t bother removing the skin. It’s good for texture. 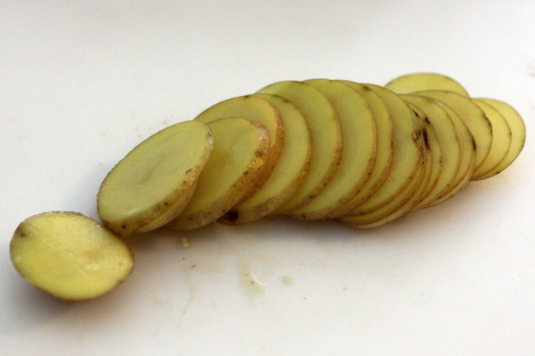 And then move to the leeks. Clean them as well, submerging them in water and then rinsing. I chose to slice mine into little disks. If you don’t want the loops in the final dish, you could slice them in half first and then slice into half moons. 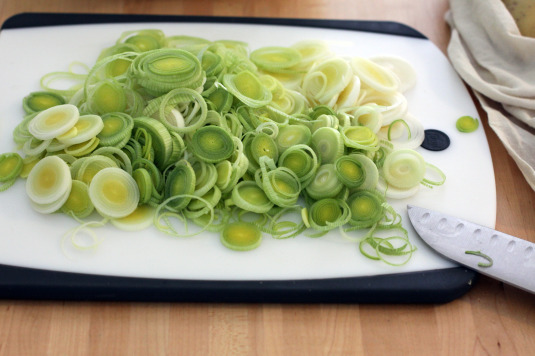 Grab your favorite casserole dish and grease the bottom and up the sides. Start by layering on the potatoes. 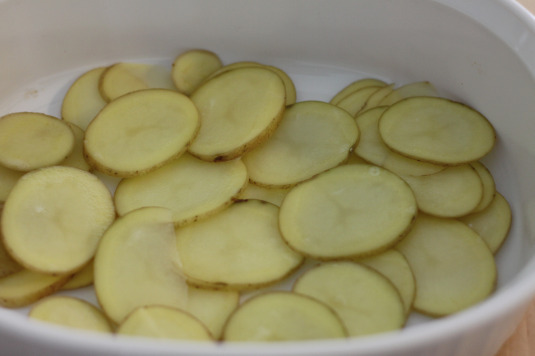 Then add a layer of leeks. 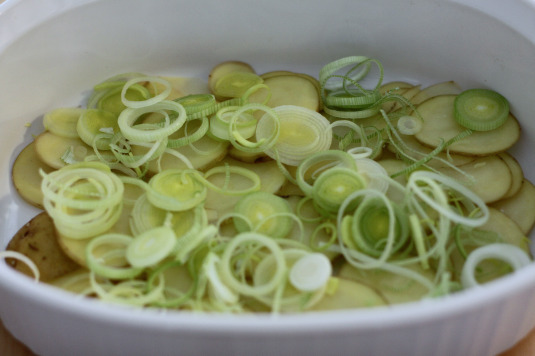 And a pinch of kosher salt sprinkled all around. 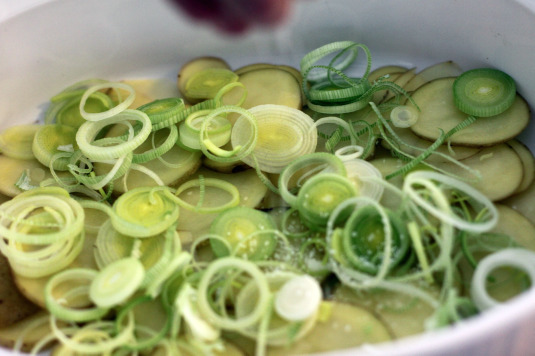 And crack a bit of pepper in there two. 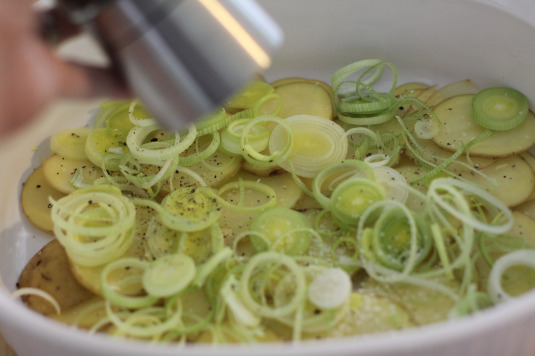 And continue on with the layers. 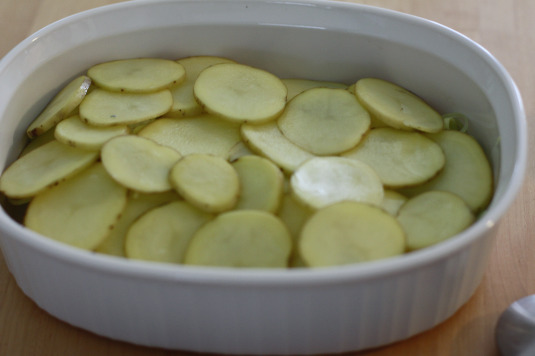 When you get to the top, add a bit more salt and pepper for good measure. 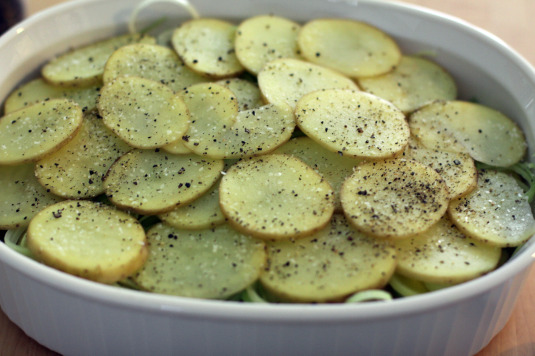 In a separate container or measuring cup, measure out 1/4 cup of sherry. If you’re not into cooking with alcohol, substitute chicken broth instead, or go with a full two cups of cream. 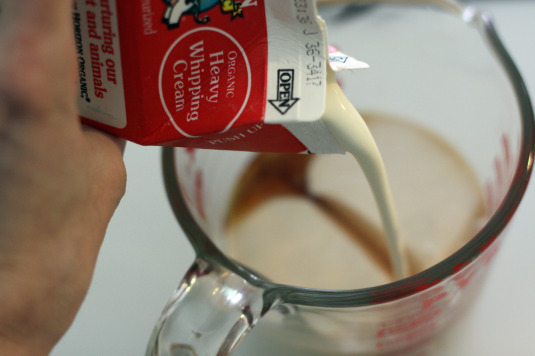 Um…so I added garlic here. Really, you shouldn’t. Instead, mix it in with the leeks before you layer them in the casserole dish. This will prevent the garlic from wanting to all pour out in one big clump. 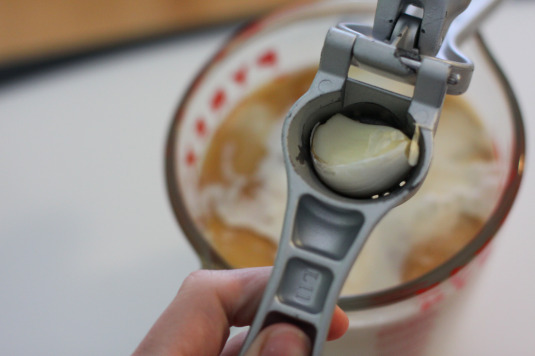 And a bit of nutmeg. 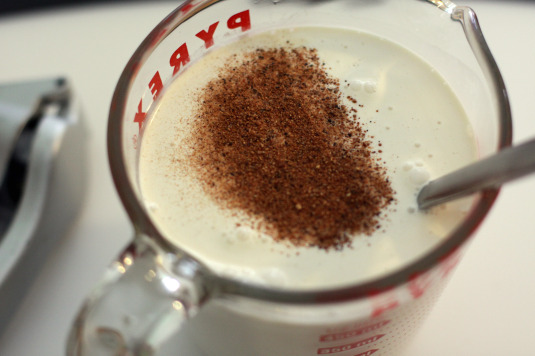 Then mix it all together. 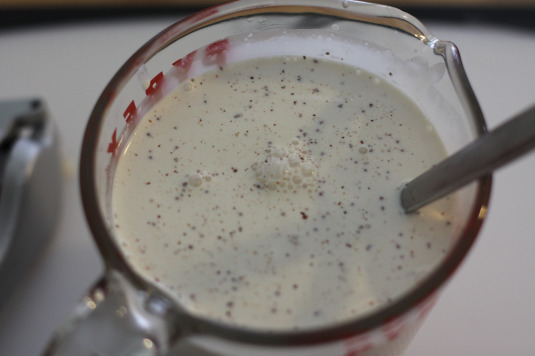 Pour the cream mixture over the potato and leek layers and into the oven it goes at 350° F. 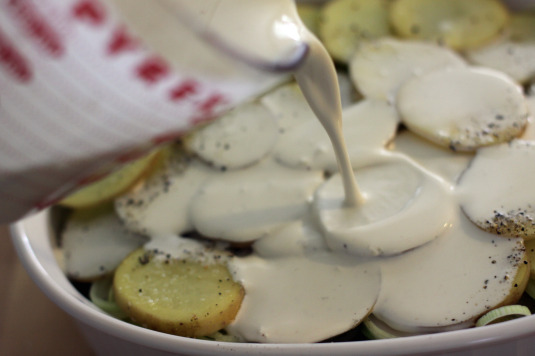 When I first started making gratins I just topped them with cheese and tossed them into a hotter oven, pulling them out 40 minutes later. Then this fall I saw the “crust break” method on Todd and Diane’s blog, White On Rice Couple. I abandoned the cheese and tried this instead, and I’ve been thrilled with the results: even creaminess throughout the gratin, light browning on top. So, after 20 minutes in the oven, gently push the potatoes back down under the cream. 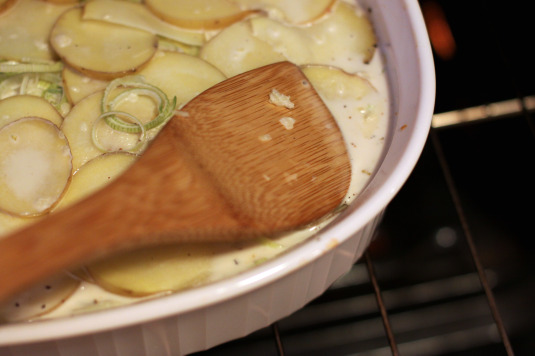 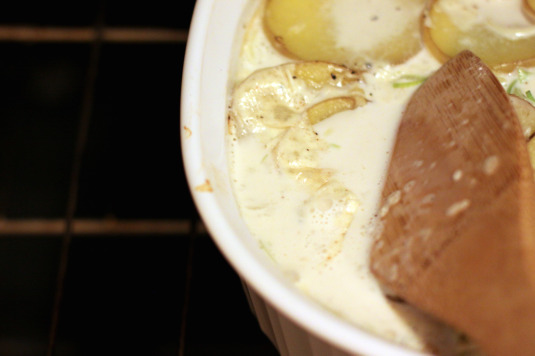 Finally, one more time at an hour cooking time. 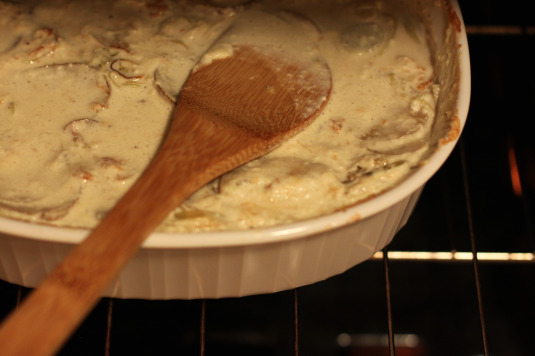 Continue cooking for another 20 to 30 minutes until the top is evenly browned and the potatoes soft. Let it sit for 15 to 20 before serving. 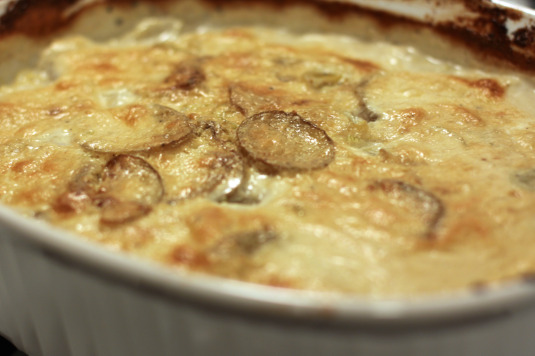 It makes the perfect dish for a late-winter meal, perhaps accompanied with a scallion and lime butter brick chicken and green beans here or whatever your heart desires. 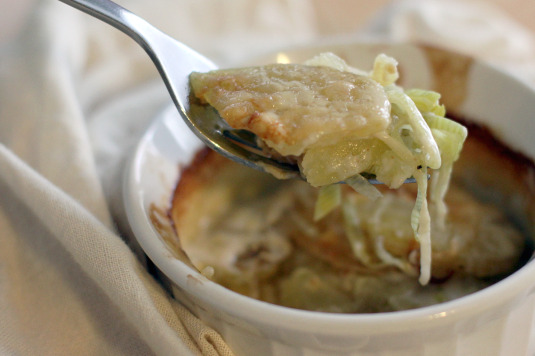 Tip: Make this in individual gratin dishes and bake for 25-30 minutes with one crust break around 15 minutes. Just as delicious and on the table in less than half the time. 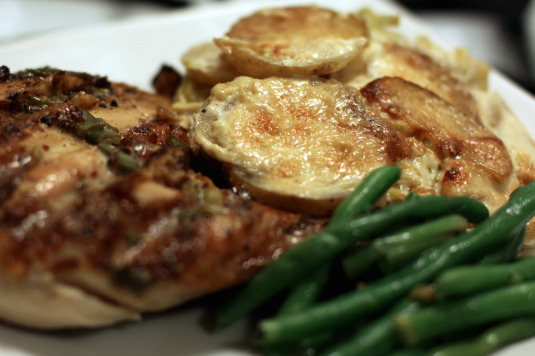 2-1/2 pounds Yukon gold potatoes
3 slender leeks, washed
2 cloves garlic, minced
kosher salt
pepper
1/4 teaspoon nutmeg
1/4 cup dry white wine/sherry/chicken stock
1-3/4 cups heavy whipping cream
Preheat oven to 350° F and grease a 2-1/2 or 3-quart casserole dish. Thinly slice the potatoes, skins on. Thinly slice the leeks and toss with the minced garlic. Layer in the casserole dish: potatoes > leeks with garlic > salt and pepper. Finish with a top layer of potatoes. In a large measuring cup or bowl, mix together the sherry/chicken stock, the heavy cream and the nutmeg. Pour over the potato and leek layers. The liquid should just cover the final layer of potatoes.
Place the dish in the preheated oven and bake for 80-90 minutes. At 20 minutes, open the oven and gently push the potatoes back under the cream. Repeat this at 40 minutes and again at 60 minutes. Remove the gratin from the oven when the top is lightly browned and the potatoes are soft. Let sit for 15-20 minutes before serving.