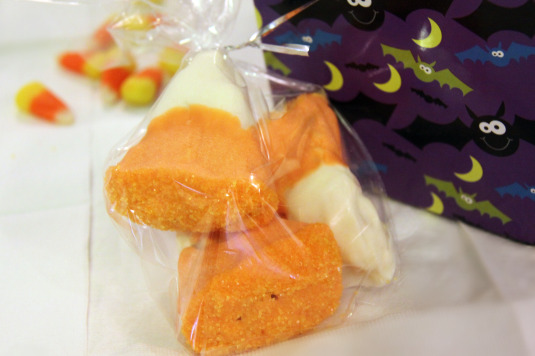 My kids have been complaining lately and with good reason. I have been procrastinating something fierce with moving into the fall season. It hasn’t necessarily been intentional. No. It’s just that there has been so much to do and juggle that things like seasonal baking have gotten pushed aside to make room for coordinating the book fair, doctor’s appointments and work. The complaint has been the overall lack of seasonal decorations coming from the mouths of my children. They have informed me multiple times that it’s going to be Halloween, and that means “we make things and hang them and paint pumpkins and put up fake spider webs.” Thank you, Kola Nut for the five-year-old’s tutorial on seasonal decorating.
You see, I am severely lacking in the decorating department. I’m not one to switch my house with every season. I mean…my house isn’t even “finished” in any kind of decor sense as it is. I do, however, make goodies and treats. So, to appease the masses under my roof, I did a few things:
First, I hung up a Halloween sign that I found in our mailbox one day after preschool. No joke. It was inside our mailbox. I put it on the side of the house by the door. “See, mommy put up that lovely orange pumpkin and bat thing.” They were not satisfied.
Then, last weekend at the farmer’s market I purchased four tiny pumpkins in varying sizes, one for each kid. I placed them in the center of the table. While they enjoy making the pumpkins act out their sibling roles, they may be more impressed if I also let them paint the pumpkins. I have added it to me to-do list for the weekend.
Since my decorating genius didn’t seem to be winning them over, I moved to bribery through their stomach and made these both for us at home and to gift away to friends. Start by making a tray of your favorite crispy rice treats. We call them Rice Crispy Bars here in Minnesota. While they’re still warm, cut into triangles. Freeze ’em. 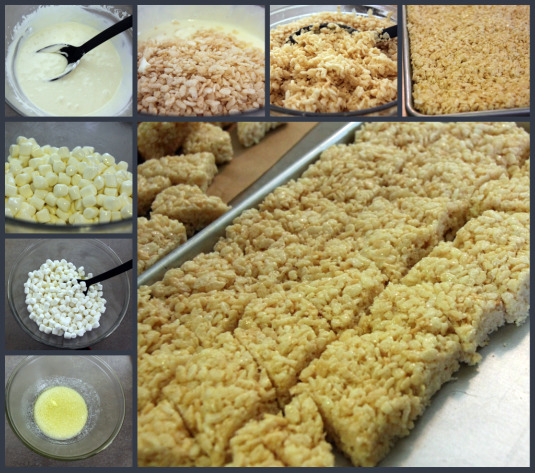 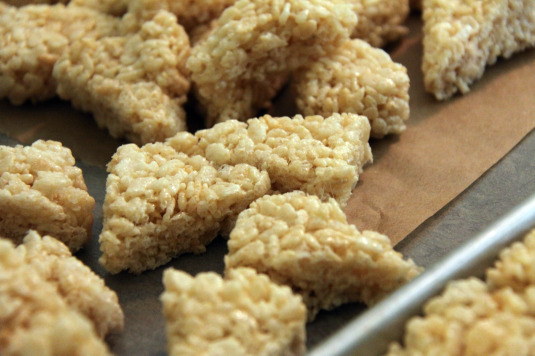 Melt your favorite wafers, white chocolate, whatever it is you use to dip things in. Retrieve the crisp rice triangles from your freezer. Start by dipping the tips and then allowing them to dry on a parchment-lined pan. Refreeze, if you can spare the space, while you melt your orange candies. Note: if using food dye to color your white-colored chocolate, use the recommended food dye for the brand to prevent disastrous results. For example, Candiquik suggests oil-based or powder colors and Wilton makes a gel coloring that works well with their melts. 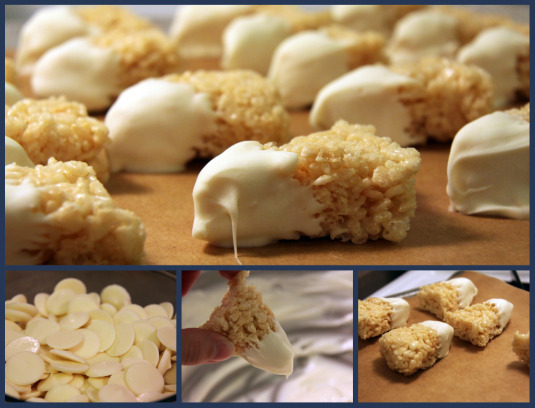 Dip the cereal-exposed ends into the orange chocolate. Give the wide end of your triangles a dip into a bowl of yellow sprinkles immediately after, and lay again on the parchment to harden. 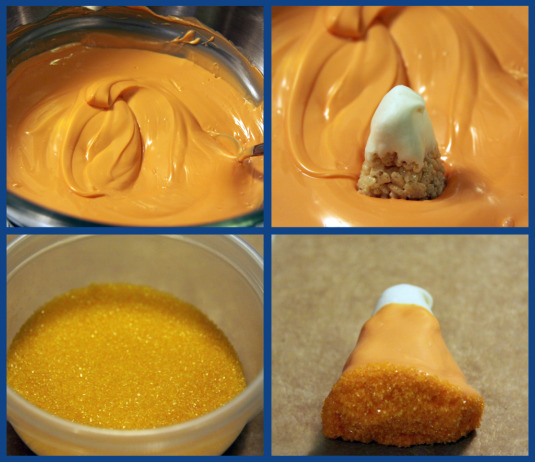 I am now the most popular mom in Halloweentown because I have giant candy corn. Loads of it. Well, of course, that is until they saw me packaging it up in little bags to give away. They were very concerned that I was gifting away the only thing I had done right this Halloween season. I told them not to worry. There will be plenty giant candy corns for everyone.

We’re off for a Saturday at the apple orchard to pet goats, get lost in the hay maze, pick apples and find a pumpkin or two that I may even let them carve a face into. Have a wonderful weekend!