Our garden is overflowing with zucchini, and after eating it 5 out of the 7 nights last week with dinner sauteed, added in sauces and cut into cold spears, it’s time to bake. Lucky for me, one of my favorite quick breads is zucchini bread. This one is complete with orange zest and a light orange glaze and packed with walnuts.
A few weeks ago, our neighbors Doug and Sarah graciously fed our lone pet, a rescued goldfish, while we were up in the woods getting eaten alive by mosquitoes. They have also given us access to their raspberries, which my children could not be more thankful for, and this is only the beginning of things I need to properly thank them for.
Sarah calls zucchini the “ding dong ditch” vegetable because you get so many from a single plant that you start leaving them on random doorsteps. While I didn’t leave this on the doorstep and run away, it was tempting. I have more than enough. It’s a good thing I’m a fan of zucchini or I’d be in a tough place right now with 3 enormous zucchinis in my fridge. They’re enormous because I also didn’t manage to tell anyone to pick said zucchinis while we were in the woods, and I’m not one to waste. So I made 10 loaves. Then I dropped them off with people I needed to thank for one thing or another or another. Apparently, I have many people I need to thank, apologize to or buy their love through their stomachs. Whatever the case, it was a good reason to use up some the bounty of zucchini growing in the garden.
I use my food processor for the shredding of the zucchini. There is little physical labor involved in the process, which isn’t exactly my goal. It’s just a fact. (I went on a bike ride pulling Kola Nut behind me tonight. That is where the physical labor came in. Kid is heavy.) I am not afraid of physical labor. I have four kids, and they create physical labor like you would not believe. It’s a good thing I love them too. 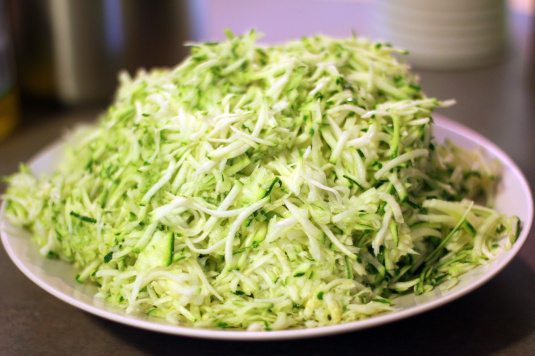 There is a rhyme and a reason for adding ingredients in the correct order in most baked recipes. For example, I was always tempted to skip the “mix all dry ingredients together and mix into wet ingredients until all are combined” or whatever it says. What a pain. Get another bowl dirty just to mix a teaspoon of salt and 3 cups of flour? However, the whisking, sifting and stirring together ensures all the salt is evenly distributed, and the process of adding the flour activates the gluten and, if your recipe has it, the baking powder. Timing actually IS important. 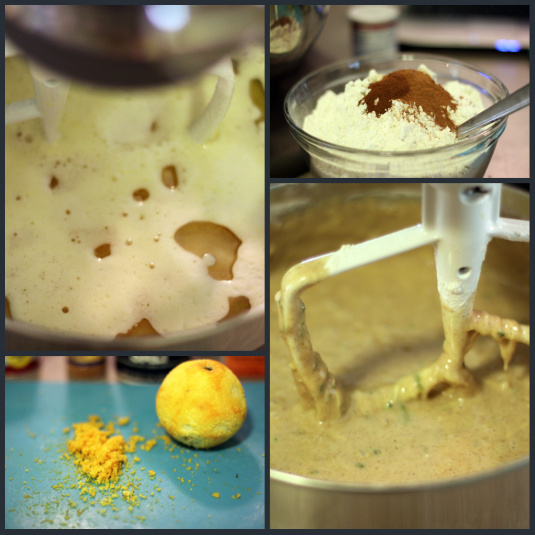 I waited until Round 2 before making adding my pecans, after all the non-nut versions were baked, wrapped and moved to a different location. Why? Allergies. I have friends with tree nut allergies. Therefore, I wrapped the nut-less varieties up tightly, tucked them all in and said goodnight to them before I added in the pecans to the next group. You could try a walnut or two if that’s what you fancy. 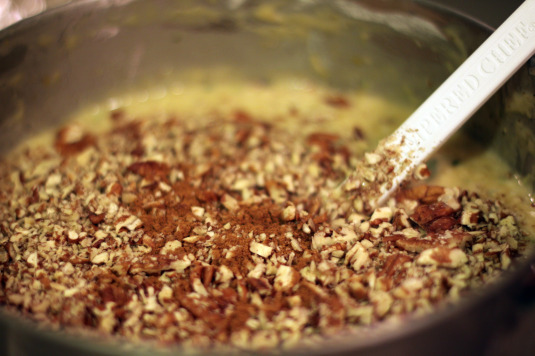 Fill your pans and stick them in the oven. Just remember to set a timer, and whatever you do, do NOT sit on the couch and think you’re going to magically remember to get them out of the oven in the middle of whatever movie your husband has on. You will forget. At least I did, but it was okay. I killed nothing.

While your bread is cooling, mix a bit of powdered sugar and OJ together and spread it on there. 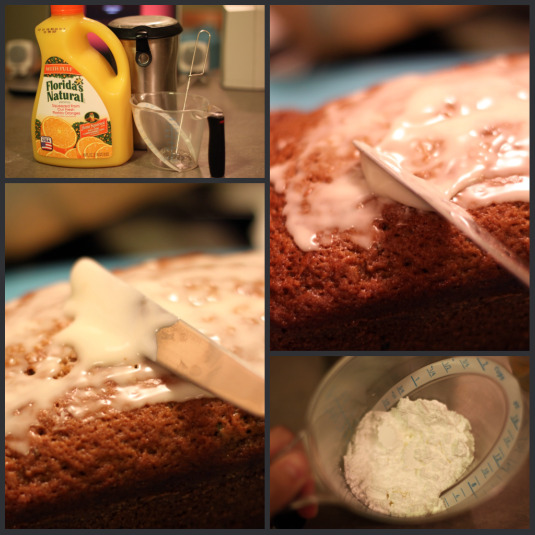 And then spread on some more until the whole top is covered. Let it set while the bread cools before packaging. I like to wrap them tightly to make sure the bread doesn’t dry out. 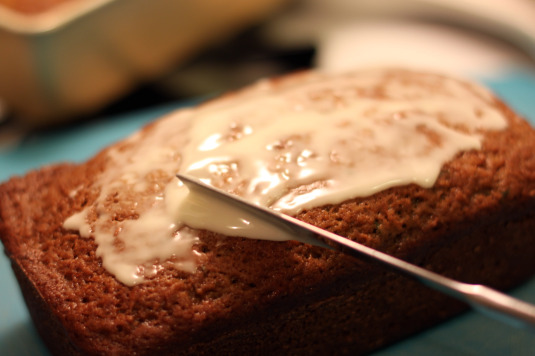 4 eggs
1 1/2 cups sugar
3/4 cup canola oil
2/3 cup orange juice
2 cups shredded zucchini, don’t bother peeling it
3 1/4 cups flour
1 1/2 teaspoons baking powder
1 1/2 teaspoons baking soda
1 teaspoon salt
2 1/2 teaspoons cinnamon
1/2 teaspoon ground cloves
1 whole grated peel from medium orange
3/4 cup chopped pecans
Glaze
1 cup powdered sugar
2 teaspoons orange juice
Preheat oven to 350ºF and grease and flour the bottoms of two loaf pans. I use 8″ pans. In a large bowl or a mixer, beat the eggs until they are a deep lemony yellow. Beat in sugar, and then stir in shredded zucchini, 2/3 cup orange juice and the oil. In a separate bowl, whisk together flour, baking powder, baking soda, salt, cinnamon, cloves and orange peel. Fold in chopped pecans (or nuts of choice).
Bake at 350ºF for 50 to 55 minutes until toothpick in the center is clean. Remove from oven, cool slightly.
When bread has been removed from the oven, mix together powdered sugar and 2 tablespoons of orange juice. Add additional orange juice in 1 teaspoon amounts if it is too thick. Spread glaze over baked loaves while still warm. Allow to cool completely. Wrap tightly and store in the fridge.


Copyright © Food for My Family.


For more ideas on how to get rid of your zucchini, visit Tammy’s Recipes In-Season Recipe Swap.