Velvety peaches in a bourbon-spiked caramel-like sauce fill a crisp pie crust and get topped with a smokey bacon crumble in this recipe for homemade summer pie. 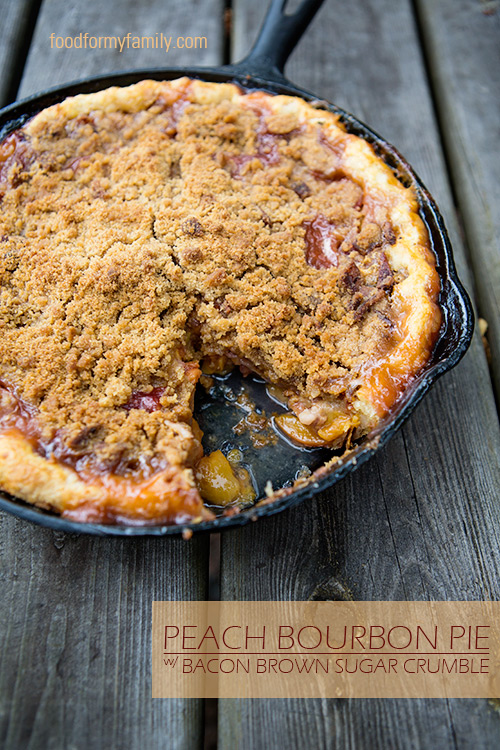 I have mentioned before that August is where I would live forever if we could stop time and continue repeating just one month of the calendar year. The produce in my neck of the woods is at its peak. Raspberry season arrives at the beginning of the month, melons are finally ready to be released from their vines, and the peaches have made their way from the middle of the country to our climate zone where they don’t often grow.
It’s late enough in the year that the mosquito population is in a lull, and the pesky Japanese beetles that plagued my garden and fruit trees in July have gone into larval stages until next year. If there is ever a time for me to find that elusive moment of idyllic summer, August is the time.
This final week of August, however, is forcing me to question my August adoration. The past week has been filled with multiple orientations and first days for swim meets or religion and school supply runs crammed in between final trips to the community water park, the river, the lake, the neighborhood block party, the fair in my backyard, one last summer dinner hosted on the patio for friends. 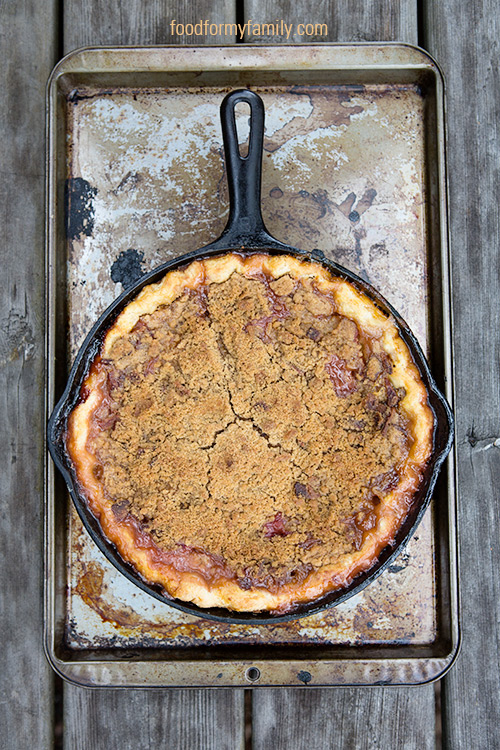 Then I made pie. Pie is the answer to all of life’s stressful days, exciting and fun-filled as they may be. Problems become smaller as butter is cut into flour, and by the time you’re ready to roll, they seem to spread across the counter from a giant blob to a smooth sheet, ever so thin.
The brightest bits of summer go inside, from sun-ripened berries to golden peaches to blushing apple beauties. By the time the oven timer dings, the worries have all melted into the butter, creating a crisp, flaky exterior encasing something beautiful. 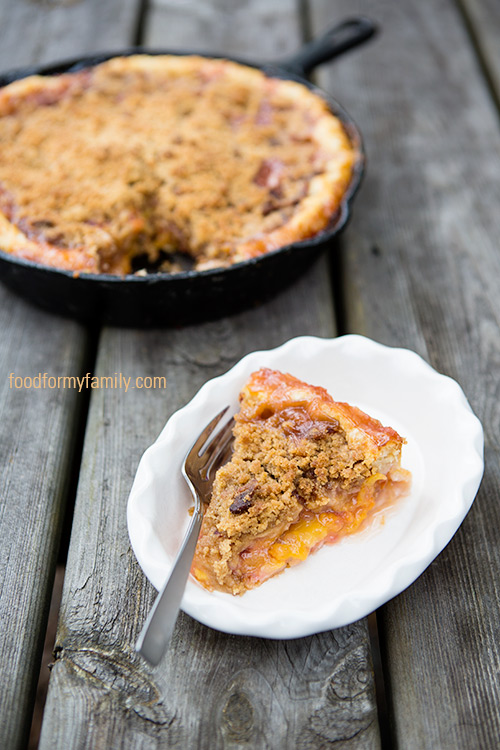 Of course, being me, there’s plenty of room for a bit of salty on top and spice tucked inside. I am sending off summer with one final hurrah. Flaky crust, summer’s pride peaches with a bit of bourbon, and bacon and brown sugar topping the whole thing off. Three days until school starts. Enjoy the long weekend.

1 9″ pie crust dough (half the all-butter pie crust recipe)
For the filling:
6 cups sliced peaches
1/2 cup brown sugar
2 tablespoons bourbon
2 tablespoons quick cooking tapioca (not pearls)
1 tablespoon fresh lemon juice
1 teaspoon vanilla extract
For the crumble:
4 slices bacon
1/2 cup brown sugar
1/2 cup all-purpose flour
1 vanilla bean, scraped
4 tablespoons softened butter
Preheat oven to 375º F. Roll out the pie dough and fit in a 9″ pie plate, crimping the edges as desired. Place in the refrigerator to stay cool while you prepare the filling and crumble.
Place the peaches in a large bowl. Add the brown sugar, bourbon, tapioca, lemon juice, and vanilla. Toss to coat the peaches thoroughly.
Cook the bacon over medium heat in a skillet until crisp. Remove the strips from the pan and set aside on a paper towel to drain. Reserve the grease. In a bowl, combine the brown sugar, flour, vanilla bean seeds, butter, and the bacon grease. Cut together with a fork until crumbly. Break the bacon slices into small pieces and add it to the crumble.
Remove the pie crust from the refrigerator. Pour in the peach filling, and then spread the crumble topping evenly across the top of the pie.
Bake for 10 minutes at 375º F, then reduce the heat to 350º F and bake for an additional 40-45 minutes or until the top and edges of the crust are golden brown. Cool slightly before serving. 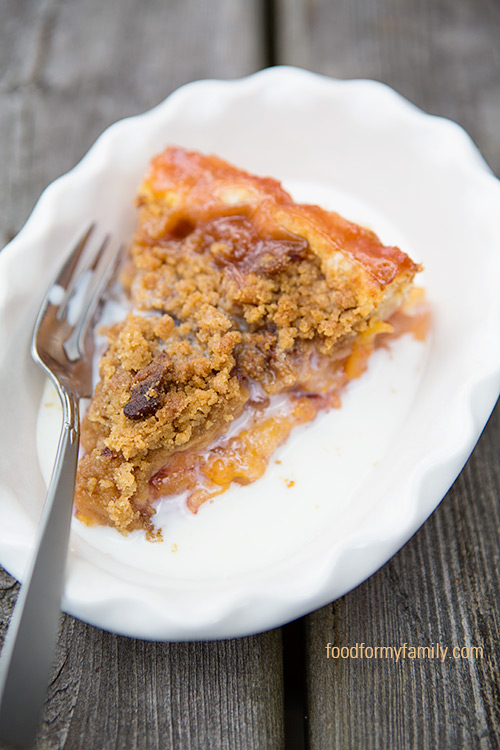