Fall came in this week with a burst of cool wind, bringing out our sweaters and socks, sandals packed reluctantly away as we prepare to move into the next season. Still, though, there are tomatoes and summer squash at the farmers market, hopefully for a few more weeks, sitting in wooden crates and baskets right alongside the apples that are becoming more and more prevalent with each passing week, and the last of the summer vegetables must not go unused.
I’ve been craving curry for a while, and I think it’s important to expose my kids to food they haven’t had before (even if I add too many peppers for them to comfortably eat it) and then to reintroduce it again and again until they embrace it. Being willing and able to try new food is something that is important for them as they get older and are exposed to different foods at friends’ houses, in the community and some day abroad.
I found a bit of inspiration online after I purchased a few patty pan squash from the farmers market one week. The brightly colored orbs were just too cute to pass up, and before I knew it, a load of green Thai eggplants had also found their way into my basket, setting the stage for the curry to come. 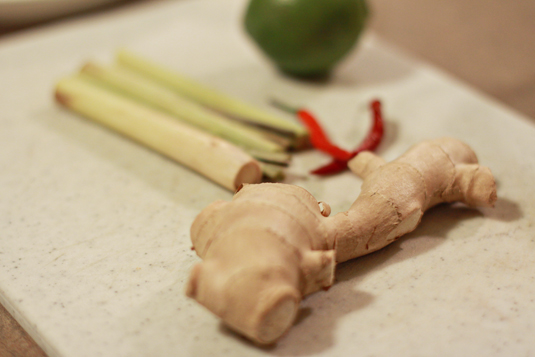 If your patty pan is small and cute, you won’t need to cut them up. Mine were a bit larger because I had originally thought about stuffing them with red lentils before I got sidetracked by the red curry craving. 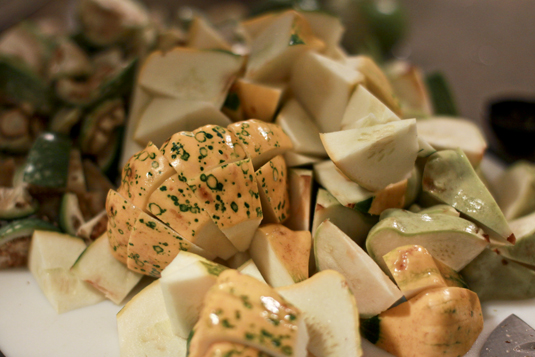 Heat a bit of chili oil in a wok. Chili oil can be found in grocery stores or in Asian markets. If you can find it, though, fear not. Just use a light-style oil if you can’t find it. Then add in your vegetables and sauté to start the cooking process. We’ll be cooking them more, though, so five minutes is plenty to get them going.

Once your vegetables have started it’s time for the curry. Add in your curry paste along with a bit of lemongrass and fresh ginger. 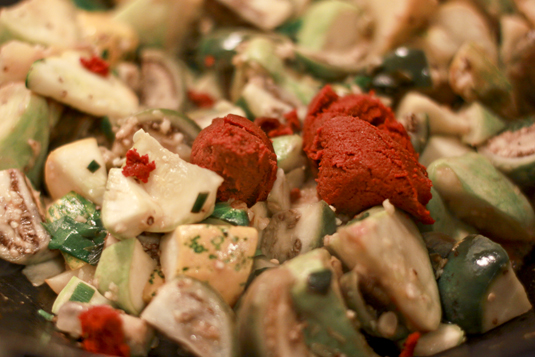 My sister Rachel was there, and after kindly watching my kids for me all afternoon, she was sticking around to benefit from the curry. Skeptical of my method, she usually cooks the curry paste and the other seasonings along with the coconut milk before mixing the vegetables. I didn’t have an issue with adding them and letting them sear together in the pan before adding the liquid ingredients, and because the eggplant and patty pan needed the extra time anyway, there was no issue with vegetable texture. Coconut milk and a bit of lime juice come in. 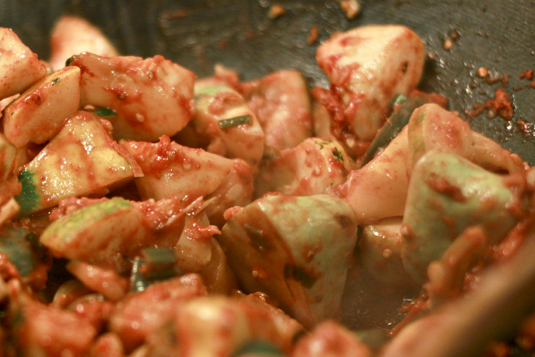 Raw shrimp purchased already deveined and subsequently peeled by me get added to the mix to simmer. 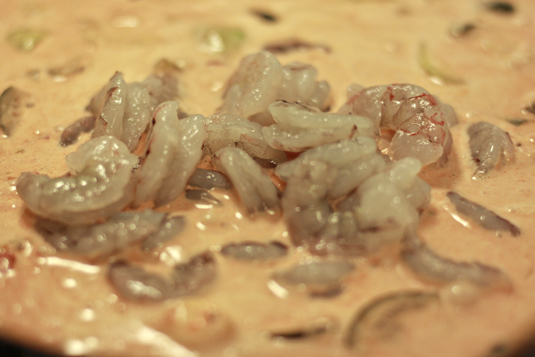 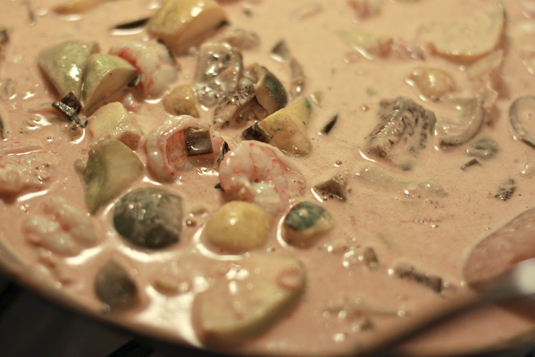 Served over basmati rice, this is a dish worth talking about. It’s spicy and fresh, and I personally enjoyed how light the shrimp was in contrast to a chicken curry. If you prefer, you could definitely substitute the vegetables used here with zucchini and other summer squash and eggplant varieties. The keys here are in the sauce, and this one satisfied my Thai-food craving for at least a little while longer. 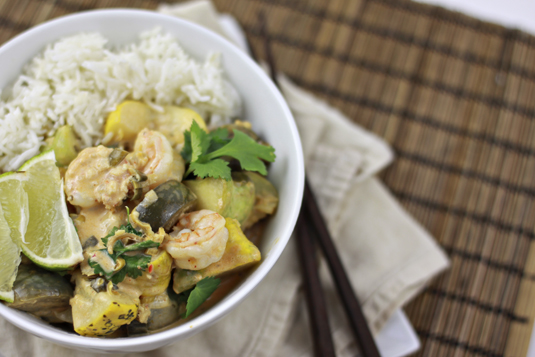 Note: The three younger kids found this too spicy, maybe because I added three Thai peppers and all of their seeds. It’s possible that could be why. Lene ate all her shrimp and the rice. Kjell ate the rice and maybe put one bite in his mouth before accusing me of trying to kill him by starting his stomach on fire. Magnus, well, let’s just say that dinner isn’t his preferred time to eat these days. It’s breakfast when he breaks that fast. That said, it’s been made again, this time without the Thai peppers on the kids’ side, and this went over much better.
The adult diners that night had no complaint, and I actually could have used a bit more heat than three Thai peppers allowed. To each their own. Experiment. Know what you like and what you can tolerate, and…maybe show some restraint when you plan on stuffing it in front of the faces of a 2-, 4- and 6-year-old. Perhaps.