Ole’s technique, tips, and recipe on how to acheive tender, smoked beef brisket to rival some of the best Texas barbecue joints. 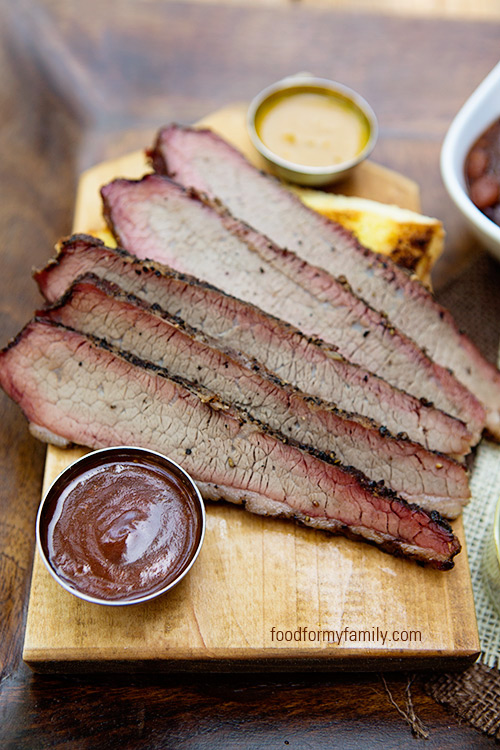 My parents were the children of small town Midwestern teachers and farmers who spent most of their formative years in Minnesota, the Dakotas, and Wisconsin. My six siblings and I grew up around the table eating home cooked meals put together with honest effort, but almost always lacking adventure. Mexican food was ground beef seasoned with a packet and spooned into hard shells. Barbecue sauce came in a plastic squeeze bottle and was used to dress up leftovers.
On very rare occasions, however, my dad would bring some adventure to the party. It usually took the form of bleu cheese, kippers, or a hot pepper from his garden. Needless to say, I didn’t know what I was missing, and as such, didn’t know enough to seek out culinary diversity when the opportunity was close at hand.
I visited Texas three times without ever having barbecue. On one trip our host even suggested going to a “real Texas BBQ,” which in my mind meant Sloppy Joes (also often called Maid-Rites or BBQs in the Midwest). The rest of the troupe was of the same mind, so I believe we settled on a Denny’s. (I’m yelling “BOOOOO” at my teenage self.)
It took until my fourth visit to Texas to finally visit a proper BBQ joint. My brother was getting married, and lunch on the day prior to the wedding was held at Goode Company in Houston. I had no idea what I was walking into, but I got to the front of the line and got down to business. I ordered the three-meat combo: ribs, brisket and duck. It came with two sides, and waiting for me at the end of the line was pecan pie, which I am powerless to say no to. And sitting there on a wooden bench, my life changed. 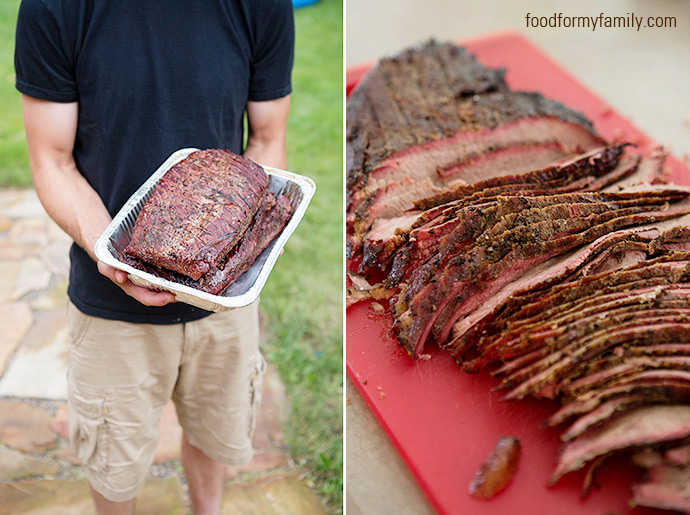 I can’t remember who I was sitting next to or how much time passed. After the first bite, my focus narrowed to the plate in front of me. All I knew was that I was eating some of the most exotic food on earth. Who knew bacon wasn’t the only meat that could be smoky? The ribs were fantastic; the duck was succulent; the brisket – the brisket was like meeting a brother I never knew I had, so familiar yet so foreign. All the qualities of the beef that I knew and loved were wrapped in a warm woodsy blanket punctuated with sharp cracked pepper. It was more tender and juicy than the round steak I was reared on.
I went on to finish everything in front of me, all the meat, all the sides, and then, the pecan pie. There was nothing left to do but nap. It wasn’t optional. It wasn’t voluntary. It was physiologically required. To this day I view it more as a meat coma, like someone pressed ctrl+alt+del on me. I woke up a new man.
Needless to say I feel very strongly about brisket. Brisket is the king of all barbecued meats and intimidated me for years. I had taken up the hobby of making proper barbecue shortly after that trip to Texas, but I stuck to pulled pork, ribs, chicken, and fish. Brisket was something I didn’t want to get wrong. I didn’t want to defame the reputation of this mighty meat. Additionally, brisket is more expensive than most of the other options, so if I did mess it up, it would be an expensive lesson. 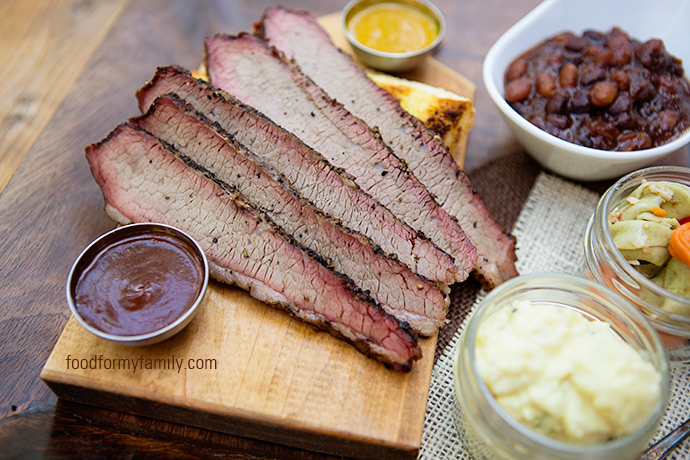 I’m here to tell you though, that you shouldn’t worry like I did. Brisket is actually very simple to prepare and requires only basic techniques on the smoker. These are a few of my foolproof tips for a successful execution learned through trial and error so you don’t have to:


This might sound a little challenging at first, but there is nothing difficult about anything mentioned above.
A properly done brisket is tender, juicy, and flavorful all on its own, but if you like a little sauce, do it Texas style with a bold tomato-based pepper sauce that is sure to compliment an already fine meal.

1 4- or 5-pound flat-cut brisket
2 tablespoons kosher salt
2 tablespoons fresh black pepper
Trim all but 1/4-inch layer of fat from the brisket and rub with salt and pepper.
Prepare you smoker according to manufacturer’s directions, and manage the smoke box to maintain a temperature of 225º F. Place the brisket on the center of the grate, fat side down, and cook until the internal temperature reaches 200-203º F, adjusting the smoke box as necessary. Plan on 1 1/2 hours per pound, but cooking time may be reduced slightly due to wrapping with foil after the first 4 hours.
Remove the brisket from the grate and wrap in foil. Allow it to rest for at least 20 minutes before slicing across the grain.
Serve with barbecue sauce of your choice over Texas toast.

*On Trimming: Cutting off some of the harder fat but not all (leave a good 1/4″ across the fat side of the brisket) will give you a thin layer of juicy protection for your meat, while also allowing your seasoning to be incorporated on all sides of the brisket, even after slicing. Leave it on or trim it down, the choice is up to you.
**On Fat Side Down: Like I said, this is a much debated topic. However, fat that melts over a brisket – the reasoning behind fat side up – doesn’t allow the fat to soak back into the meat, but rather to drip off, often taking your seasoning with it. From AmazingRibs.com, “Fat cap up or down, on or off? The argument is as old as Texas. I asked my beef consultant, Dr. Antonio Mata, a meat scientist and a former Consulting Technical Coordinator to the National Cattlemen’s Beef Association, if fat will melt and penetrate the muscle fibers. His reply was simple and unequivocal. ‘No way.’ I asked him to elaborate. ‘The fibers are packed too close for large fat molecules to squeeze in. Since about 75% of the muscle is made of water, and oil and water don’t mix, it is just going to melt and run off.'”
Also, I use a smoker where the heat source is directly below the meat as with the Big Green Egg and the Weber Smoky Mountain, not offset. Because of this arrangement, the fat side offers a protective layer between the heat source and the meat. Finally, the final product presentation is easy to cut, with a good seasoned bark that slices easily. If you use an offset smoker or have other reasons for cooking fat side up, you are welcome to do so. It’s a style preference, not a right or wrong.