If you’re getting together for the holidays, there’s a decent chance you’re also planning on eating a large roast of some sort. Break from tradition this year or throw a New Year’s dinner and do things up a bit with a filet mignon in a red wine and balsamic reduction with shallots and mushrooms. 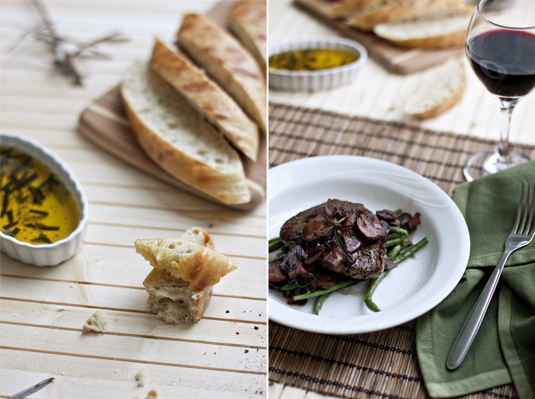 Ole grew up with Sunday dinners. After church his mom would have some type of roast waiting, and the whole family and sometimes guests would sit down to eat. With a family of seven children, I can imagine the meals were large and loud.
My Sunday dinner experience was a bit different. Once a month we’d head to my grandparents’ house, where my grandma would have a lavish meal with two kinds of of meat, salads, five side dishes and at least two desserts. There was chatting and laughter and arguing and little children running around but not touching anything, as was the rule at Mama’s house. I would hang around with my grandma in the kitchen, watching her cook and clean. On the Sundays that we did not venture to their house, my mom would make something that would resemble an everyday lunch: sandwiches, soup, leftovers. Therefore, Sunday dinners – the kind at Mama’s house – were definitely an extended family affair that involved aunts and uncles and cousins for me.
Fast forward to today, and I don’t know that we have had one Sunday dinner. In fact, we usually skip the midday meal on Sundays. Instead, we eat at the farmer’s market in the warmer months or snack on samples at the grocery store. At some point we have dinner, but it’s usually just a regular dinner, and because we don’t plan menus for the weekend, it’s either leftovers or something that we pushed off from the week for one reason or another. That is, of course, until a few weeks ago.
We had a dish we had talked about and discussed and purchased ingredients for, and because it gets dark by 4:00 p.m., it needed to be done earlier. So, we decided to make a Sunday dinner out of it, which prompted my dear husband to reflect on how lovely Sunday dinners were and suggest we start making our larger meals on Sundays when I have the light I need and he can have the Sunday dinner he needs. And because Sunday dinners for me involve more people than just the immediate family, who’s coming over for dinner on Sunday?
I will tempt you with last week’s menu, one I’d also suggest as a Christmas dinner or New Year’s meal by adding an extra side and an appetizer or three. Our filet mignon in red wine balsamic reduction will start with a a few earthy flavors: mushrooms, shallots, rosemary. Rosemary that has been plucked from beneath the Minnesota snow. The fridge ate our other rosemary. 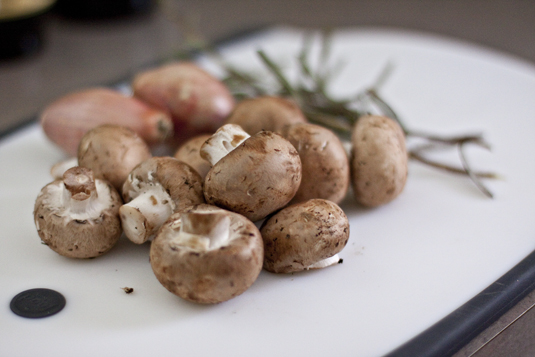 Purchasing a whole beef tenderloin, trimming and cutting into individual steaks yourself can save on the price per pound of the meat. The filet mignon is technically the cuts from the small end of the tenderloin, but we just use the whole piece of tenderloin, both thick and thin. Once you have steak-sized portions (think 4 ounces), salt and pepper both sides. 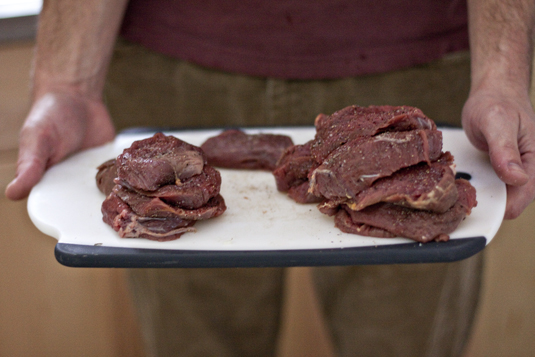 Into a hot pan with a tablespoon or two of melted butter, add the steaks and sear for four minutes on both sides. 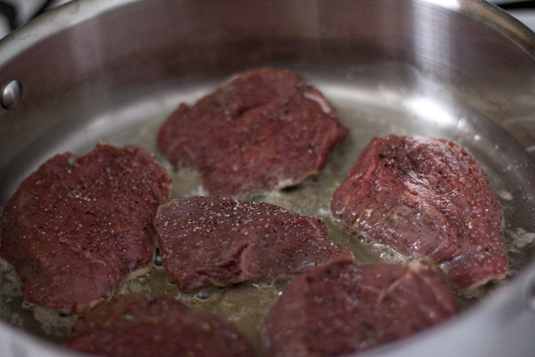 While that’s going on, mix up your red wine and your balsamic.

Then remove your seared steaks from the pan. Just set them on a plate and tent with foil. 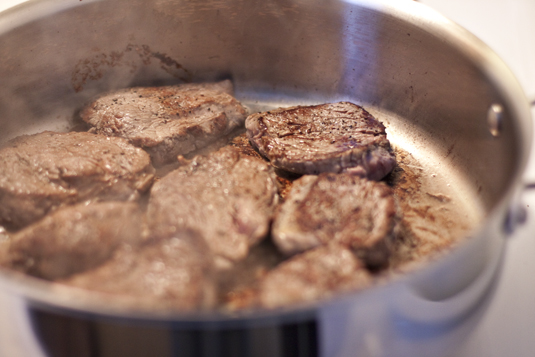 Add in the vegetables and give them a good stir. Sauté for a few minutes. 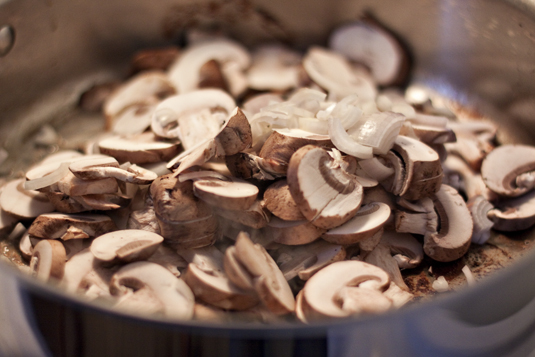 Then add in your wine. 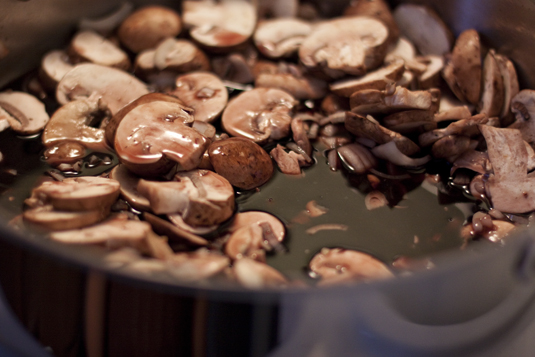 Simmer until the mushrooms and shallots are tender, then add your steaks back to the pan and cook until they’re just the way you like them. I’m a medium person, myself. 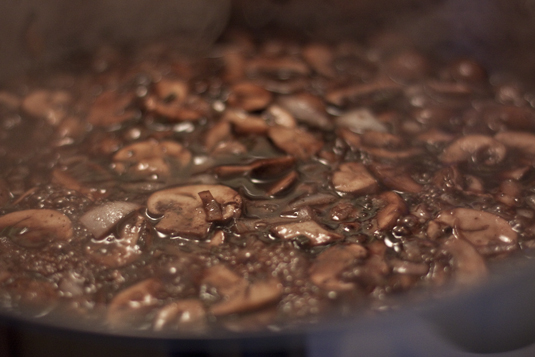 And that, my friends, is my idea of a Sunday dinner to share with friends. A soup, a salad and a filet mignon with red wine balsamic reduction over a bed of steamed vegetables. All that’s left now are dessert and the guests to share it with. 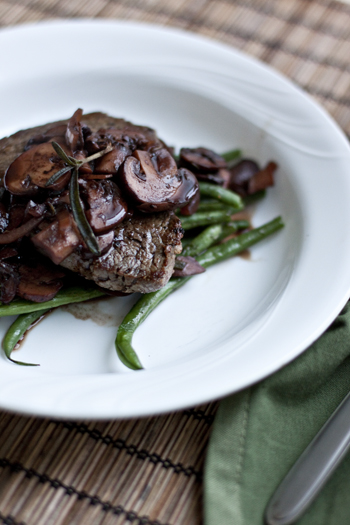 2 pounds tenderloin
4 tablespoons butter
10 oz portobello mushrooms
2 large or 3 small shallots
2/3 cup dry red wine
1/3 cup balsamic
2 tablespoons rosemary, finely chopped
kosher salt
pepper
Cut the tenderloin into 3/4-1″ fillets and liberally salt and pepper both sides. Melt 2 tablespoons of butter over medium high heat. When the butter is melted, add half the fillets to the pan and allow to sear for 4 minutes, flip and let sear for another 4. Remove and repeat with the rest of the fillets until all have been seared.
Add the remaining butter, keeping the burner on medium high. Add the chopped shallots and mushrooms and sauté for 3 minutes or until the mushrooms have decreased slightly in size. Add the wine and vinegar to deglaze and then add in rosemary, and then bring to a boil. When the liquid is boiling, season with up to 1/2 teaspoon salt (if desired), turn the heat down to medium and simmer until the liquid has reduced by half.
Return half of the fillets to the pan and cook to desired doneness, flipping halfway through. Remove fillets and repeat with the other half. Plate the steaks over a bed of steamed vegetables or potatoes. Spoon reduction and mushrooms over the top of the steaks.