How to bake a good and crispy french fry at home. Here are three different methods we tried, each with different results from boiling and pre-baking to letting them soak. 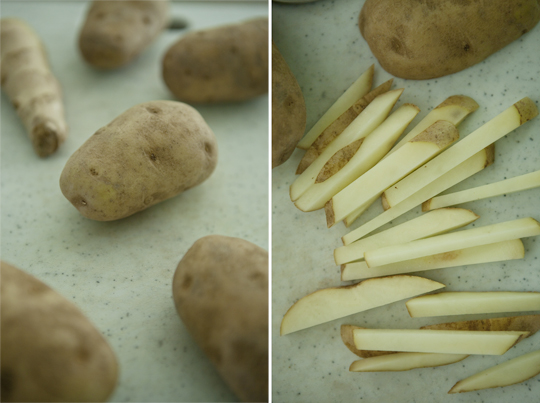 As part of my french fry flavor creation for Alexia Foods, I needed to figure out the right and proper way to make baked french fries at home. How do you get that crispy goodness without filling a pot full of oil and dumping the potatoes straight into it? (Baked French Fries is kind of an oxymoron.) I tested a few methods to find the one that worked for me. I used a julienne cut and russet potatoes for all tests to keep things consistent. 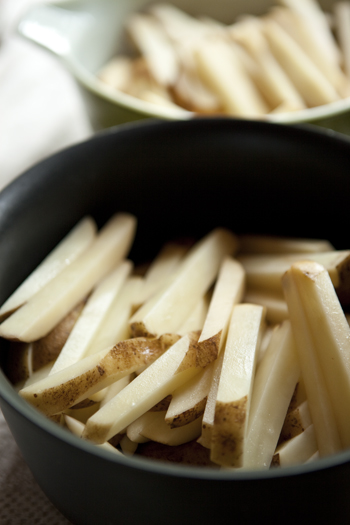 Method: Preheat your oven to 375° F. Bake cut potatoes for 10 minutes. Remove from oven, cool, season and bake again, 7-10 minutes on each side until browned.
Results: These turned out nice, but I didn’t like all the turning, and having the oven on for longer than absolutely necessary during the heat wave we’d been having was not ideal. I also found it harder to get an even crunch across an entire tray of fries, as the turning was pretty gosh darn important to the success of these. 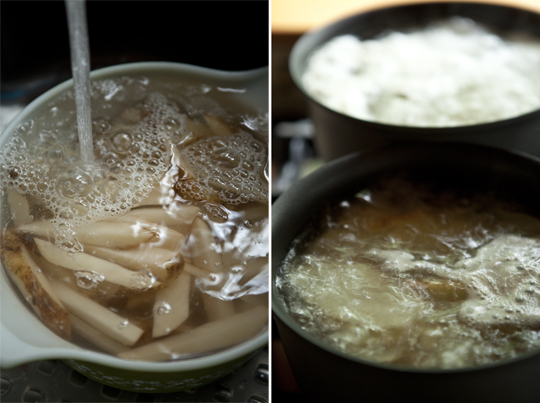 Method: Add cut potatoes to large bowl and cover with warm water. Allow to soak for 20 minutes as you preheat your oven to 475°F. Drain the potatoes, pat dry and toss in oil to coat. Season and bake for 10-15 minutes, rotating the sheet halfway through. Turn the fries and bake for an additional 10 minutes or until golden brown.
Results: These produced nice, crispy french fires, but they were also a bit time consuming with all the soaking, drying and then baking again. Still, the quality was good and the fries tasty.

Method: Add cut potatoes to a medium saucepan and cover with water. Bring to a boil over a medium-high heat and boil for 8 minutes. Remove from heat, drain and pat dry. Toss with oil and seasonings. Broil for 4-5 minutes per side or until crisp.
Results: These took considerably less time total than the other two methods, which was nice. You had to be careful on the boiling time, so as not to overboil and end up with mashed potatoes, and you obviously need to remain close to the oven as the fries are under the broiler. This method produced crisp fries that were cooked through on the inside and plenty crisp on the outside. 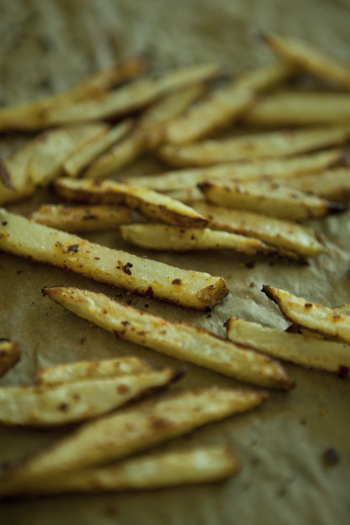 All of these methods worked in their own way, and I ended up with crisp french fries that were delicious to eat each and every time. However, I ended up liking “boil then broil” method best. It was important to make sure your boiling liquid started cold, so as not to overcook the potatoes, but the time invested was considerably less. Plus, it also lent itself well to adding in a bit of extra flavor if you wanted, which I’ll tell you about tomorrow with my final french fry recipe that I submitted to the Alexia Reinvent a Classic Challenge!
Before you go, a few announcements. First, we just had a new post go up on the Piccolini TV site, and they revised the comment policy, so now it’s really easy to leave one! Second, I’m writing for Enough Time Moms for Day-Timer, and I’d love if you’d check out my first two posts: Saving Time in the Kitchen and 6 Tips to Meal Planning Success!