A kale salad recipe that pairs honey-roasted beets with crispy pepitas and goat cheese, tossed together with an apple cider vinaigrette. 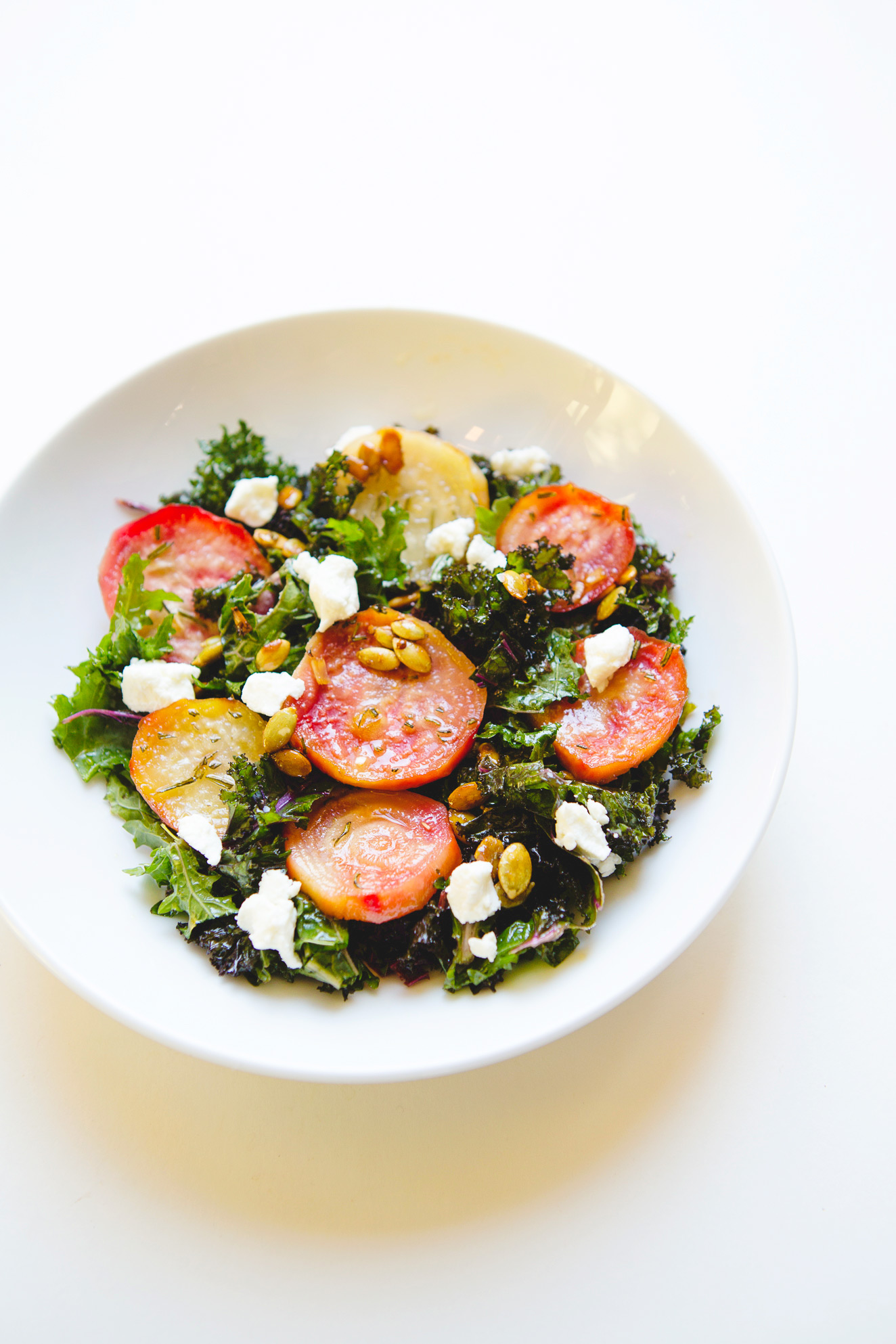 I’m standing in the kitchen over a bowl of steaming beets, watching as the sunlight streams in from the window and reflects off the whirls of thick steam rising from the bowl, dancing together across the countertop. The sky outside is a deep, clear blue, and a burst of cool air fills the small room as Lene pulls open the sliding door and runs in from raking leaves in the backyard.

She sails by, bits of crunched leaves falling to the floor behind her. As she reaches the arched door, just before leaving the space, she pivots and turns to where I am peeling and slicing the beets. “Ooh, I thought I smelled beets. Are these the ones from our garden? Look at all the stripes!” Without waiting for a response, she picks up a barely-cooked beet slice and pops it in her mouth. Mouth full, through smiling lips, “Mm-mm-mm.” And then she’s gone towards whatever she had originally come in for, leaving me in the kitchen smiling at her back. 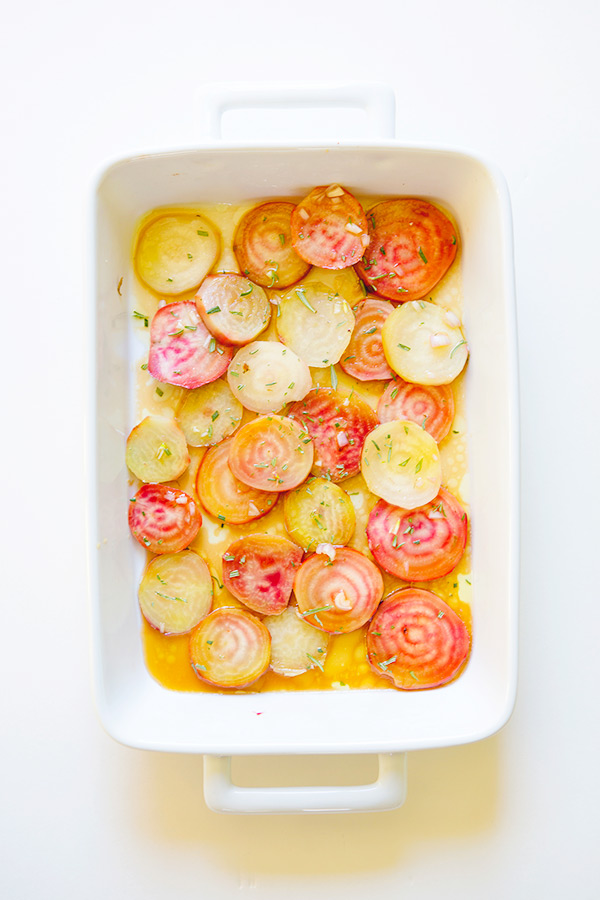 In the spring we had picked beet seeds from a carousel display at the store. Two packages, one mixed heirloom and another Chioggia, both chosen for their pretty hand-drawn illustrations by a wide-eyed girl. She drew wooden signs copied from the packets before we planted them in somewhat straight rows, poking our fingers into the freshly turned dirt. Then we waited.

We thinned the herd, picked a few of the larger beets early, but the real reward came late in the season, the final turning over of the garden as we prepared for winter. Piles and piles of multicolored beets with tender greens were harvested; so many that we have had to be creative in how to get them all eaten.

Not surprisingly, the one who is most interested in the beets, who sings their praises and steals unseasoned, partially cooked beets from the counter is the girl who chose them when they were only tiny seeds in a paper package. She’s been there from planning to harvest, and now in this season of gratitude, she’s stuffing her face, unaware that others turn their noses up at beets. 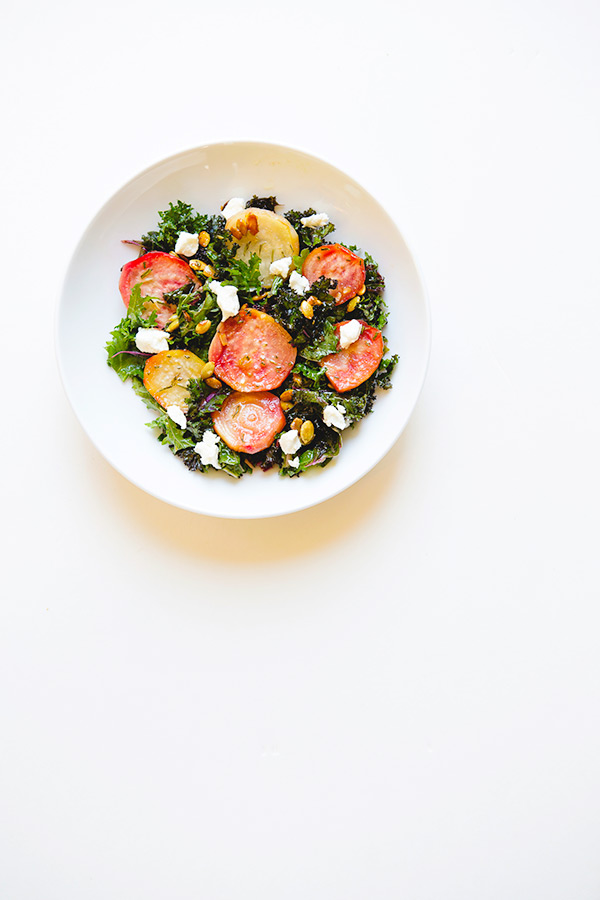 I shared this salad with my sister, while we discussed how beets were nonexistent in our childhood aside from the odd pickled beet, yet we both enjoy them a variety of ways now. We reminisced about our frozen-mixed-vegetable youth while standing with honey-kissed beets on a bed of Red Russian kale, kale which also grew in the dirt plots behind my house.

Perhaps it is in the preparation, how we both grew up surrounded by food prepared and eaten in the kitchen of our home. Maybe it’s because we were taught to be grateful, to appreciate the bits of food that were better than our daily serving of limp, under-seasoned mixed vegetables. Regardless, crunching on roasted pepitas, letting the goat cheese melt across the bits of crisp kale, and biting into striped beets while my niece crawled around our ankles with my singsong daughter hovering made it worth every minute of garden toil.

Yes, the dressing is 1 dressing that gets separated and used 3 ways. I like to minimize dishes and maximize my time.

If you don't want to boil the beets before you peel and slice, you can also microwave them covered in water for 8 minutes. 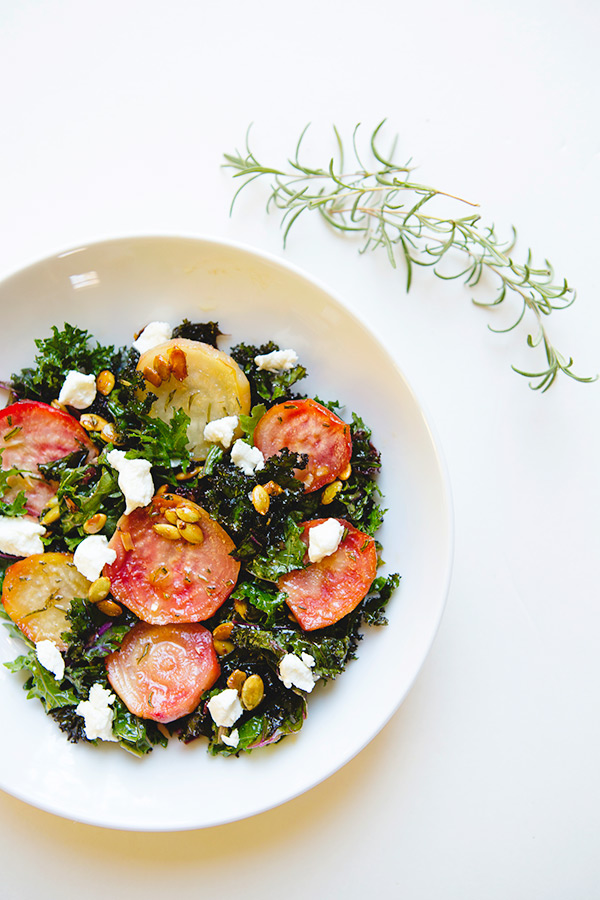 I’m participating in November’s Eat Seasonal, hosted by Becky at The Vintage Mixer. It’s a group of us all talking about what’s in season and sharing a recipe for preparing that food. 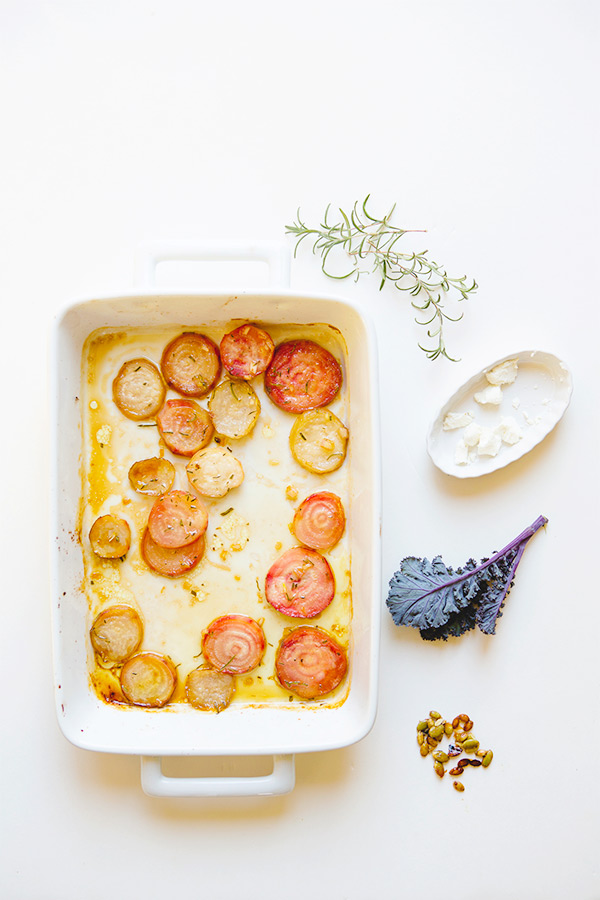