This is a post about bean salad. A Mediterranean bean salad I made back in June. It has taken me this long to share it, but that’s because I had some other sharing I was obligated to do. It’s a post about Greek seasoning on chicken. It’s a post about stuffing it all together in a pita, serving it with tzatziki to make a chicken gyro and having a wonderful meal with your family and your friends and your neighbors. It’s a post about food.
This is a post about the food I feed to my family.
I made bean salad. I’d had some at Costco, of all places, and I was instantly drawn in. Beans, barley, peppers, sauce. Simple, understated and bursting with flavor. Ole was not convinced as I cooked and drained beans and barley and stashed them away in the fridge to cool. Note: I had originally planned to use three bell peppers in this recipe. That is, of course, until Ole used one of them for something else. Flexibility is key to a happy marriage.

Mix the pesto, the beans and barley, the peppers, a bit of vinegar to pull it all together and a Mediterranean bean salad you shall have to be eaten on pitas or with pita chips or scooped up with a spoon and a fork. And I was happy with it. I packed it up, placed it in the fridge and told Ole to make it a meal with some cucumbers and tomatoes from the garden while I was gone, but he was skeptical. He did not trust me. Turns out, I was right, but he made the chicken anyway. 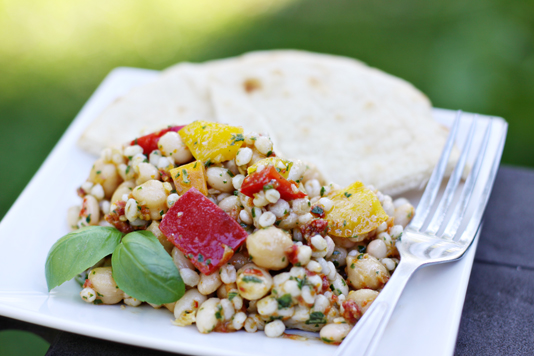 A Greek-seasoned, dry-rubbed chicken, grilled and thinly sliced. This is what happens when you stock your pantry, meals become feasts in a matter of minutes. In fact, I shared that same sentiment just today how making impromptu meals from your pantry is so much easier when you stock that pantry. 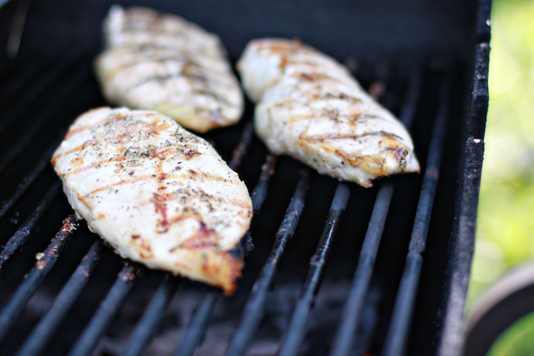 He also paired it with homemade tzatziki, which is easy to make and is so much better when you make it fresh. It’s bright and lively, and it pairs nicely with said Greek-seasoned chicken. 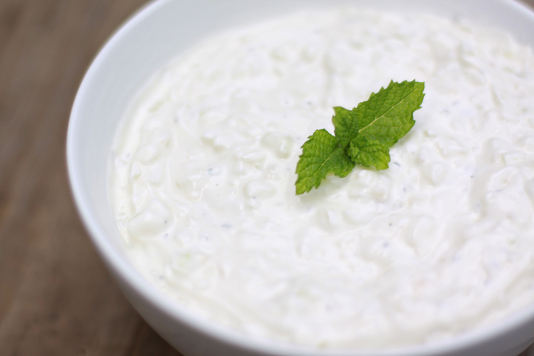 And he put the salad on the side (except the kids and I still put it inside) and made a gyro. I do have to say it looks like a meal I’d love to eat. Ole even called to let me know the bean salad was a new favorite with the kids, and they’d begged to eat it for lunch the next day too. 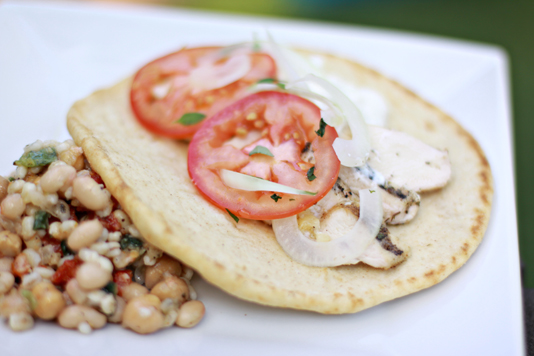 The moral of the story is that my husband knows not how barley and beans can be mind-blowing. In fact, our dinner guests last month asked specifically for the recipe. My kids cheered when it showed up on the table for a third time this summer. I cried inside when everyone ate it all because it meant I couldn’t eat it for lunch the next day. 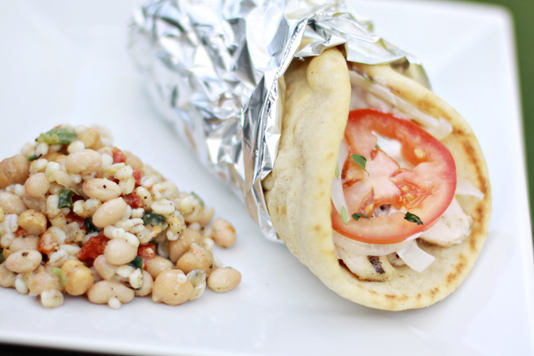 And the chicken gyro? Well, it’s pretty fantastic, and so is the man who made it. 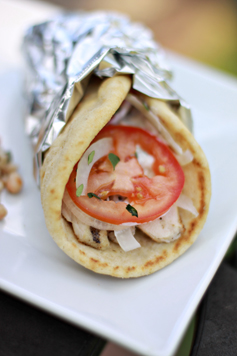 Ole is gone, gone gone this week(end) motorcycling in the UP, and I am attempting to remain sane by taking the kids on short jaunts around the neighborhood. We already hit Conny’s Creamy Cone, and I think we’re going to attempt the beach sometime this weekend too. I hope you all have a fantastic weekend!

Chicken Gyros:
2-3 chicken breasts
1/4 cup Greek seasoning (above)
1 cup tzatziki
fresh oregano
fresh parsley
1/2 white onion, thinly sliced
3 plum tomatoes, thinly sliced
6-8 pitas
Rub chicken breasts with seasoning and grill, 5-7 minutes on each side until juices run clear. Remove from grill and allow to rest for 5 minutes before slicing. Finely chop a tablespoon or two of the fresh herbs and sprinkle over the onions and tomatoes. Slice and serve on pitas with tzatziki, tomato slices and onion.