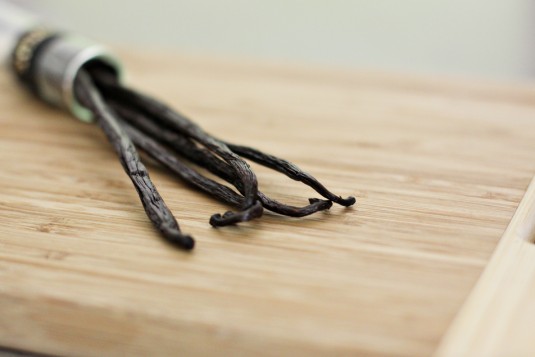 The high today is supposed to reach 90. It makes it hard to believe that just two weeks ago I was waiting for the overnight lows to stay above freezing before I put my seedlings in the ground. I am hot and sticky, and I am dreaming of the technology that is called central air. You may have heard of it? I had it at one point. In fact, I had it my whole life until we purchased our own home. Now? I make ice cream and stand in the laundry room on the cement, eating vanilla bean gelato out of the freezer. It’s kind of like air conditioning from the inside out. 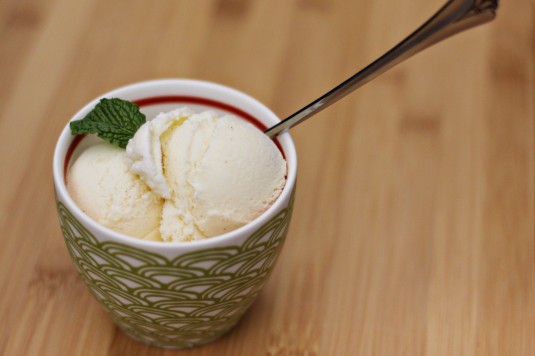 While I received an ice cream maker as a gift several years ago, it took me several years to use it the first time and then several years to use it again. This is partly due to the tragedy of me eating less ice cream lately. I blame pregnancy, which tends to make me crave things like raspberries and spinach salads instead of ice cream and pickles, and I blame my husband, who prefers dessert come in cookie form. Whatever the case, I broke out the ice cream machine when I saw half gallons of organic cream at Costco, and now I can’t stop. I have made two batches of gelato, with a third (ice cream this time) in the fridge waiting for a turn in the magic churning machine.
Eggs. Ten of them, to be exact.

Beat them lightly and set them aside. 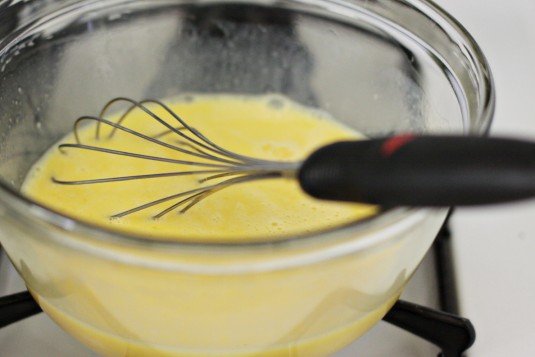 In a large stockpot we add the sugar. 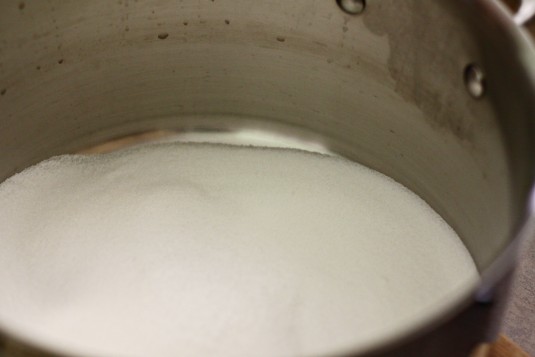 And follow the sugar with the whole milk and the cream. Gelato has more whole milk than ice cream would, which lowers the milk fat. Ice cream is more, well, cream. 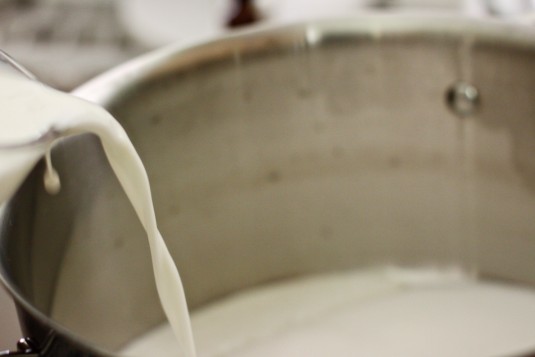 As we heat slowly, we get the pleasure of whisking. When I got bored, I had my oldest daughter do it, and when I got tired of hearing her complain that her arm was going to fall right off into the mix, I had my 14-year-old sister do it, who happened to be over just for this very reason. I whisked Batch 2 (ginger flavored) myself, though, because they all ran and hid the minute I pulled the stockpot out. 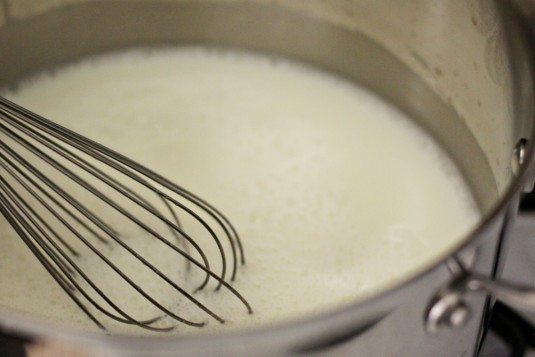 When the milk and cream starts to bubble slightly around the edges of the pan, it’s time to temper the eggs. It is easiest to have them close at hand, which is why we got them ready first. 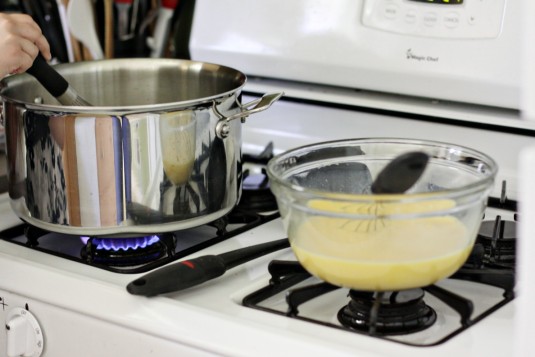 To temper, we’re going to slowly add a small amount of the hot liquid into the eggs while whisking so that the eggs heat but do not cook into a solid. Lumpy scrambled eggs in ice cream is never a good idea, so temper we must. After two ladle-fulls of steaming milk and cream, I then pour the warm eggs into the pot and whisk to combine. 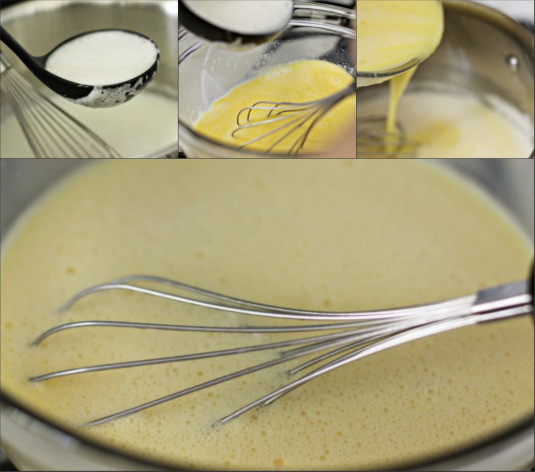 Continue cooking and stirring until the mixture thickens, which generally takes about 8 minutes. The common test is whether it coats the back of a wooden spoon. When that happens, remove it from the heat and let it cool a bit. 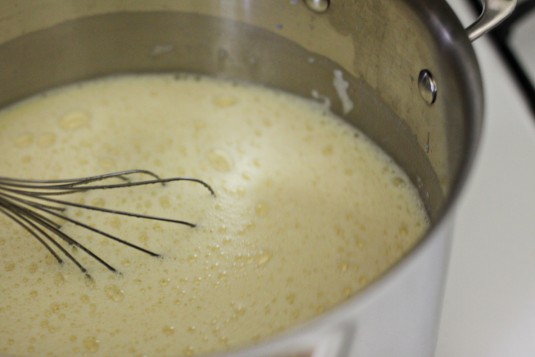 We want to let it cool because putting all that hot liquid into the refrigerator would cause the temperature to rise, and a warm fridge is a dangerous fridge. So, let it sit while you clean up and do some other things. Like deal with the vanilla bean you’re adding. 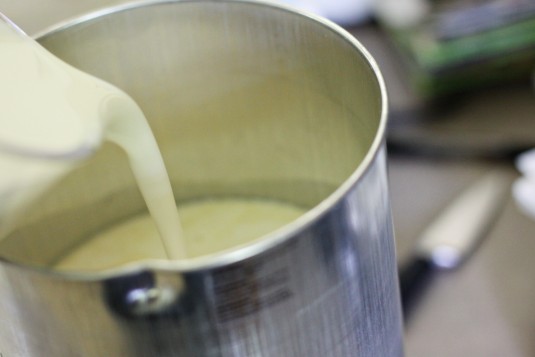 Split a vanilla bean down the center with a sharp knife. 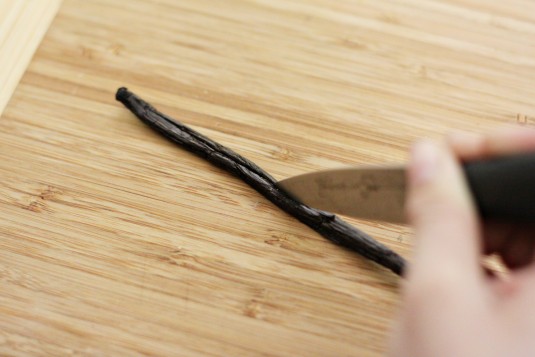 Then use the knife to scrape out all the seeds on the inside of the bean. 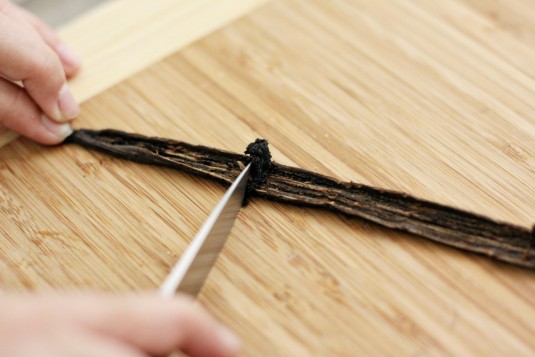 Mix the seeds into the ice cream mix. 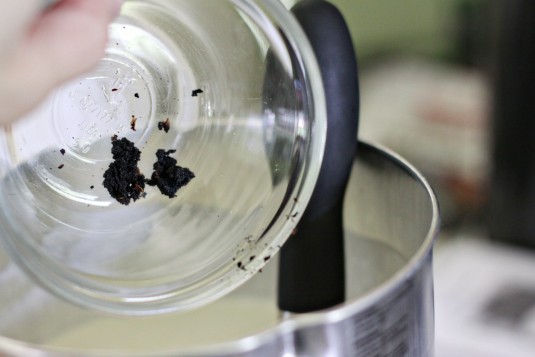 I opted to also add a bit of vanilla extract. My recipe is a larger one that will fill a 4.5-quart ice cream maker, and rather than use 2 vanilla beans or 2 teaspoons of extract, I chose to use a bit of both, but if you’re halving the recipe, feel free to choose one or the other. 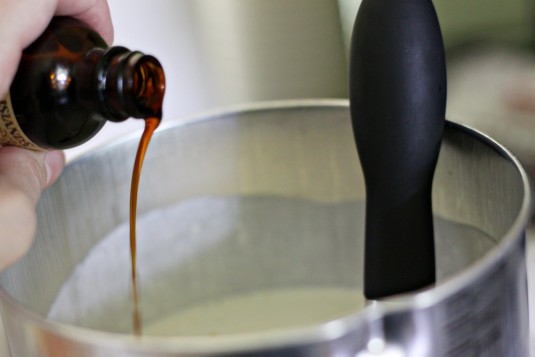 Freezing is as easy as reading what you do in your ice cream maker. Just follow the instructions to harden. 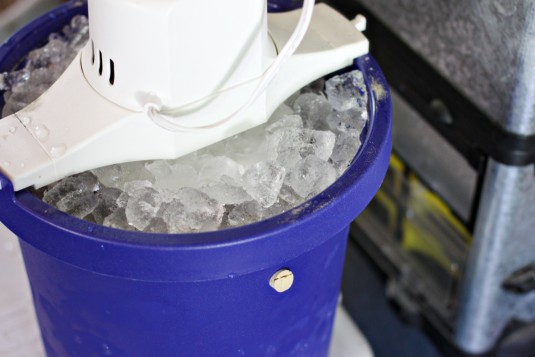 This is before my gelato went in for the hardening. I maybe ate a bowl of it this way. It was like soft serve, only better. Much better. 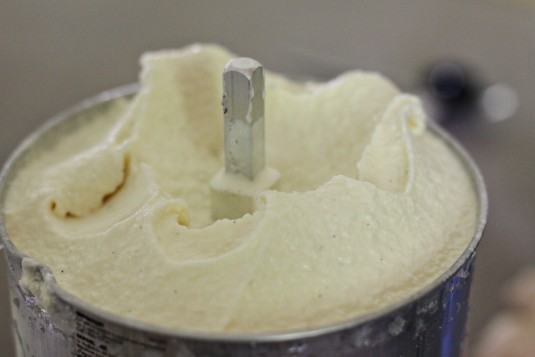 And enjoy. Perfect for those nasty, sticky days of summer where the humidity seems to swallow you whole. 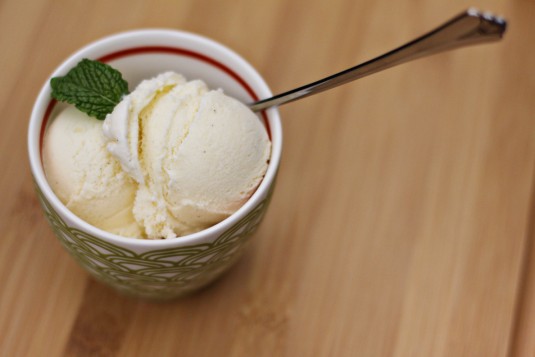 4 cups whole milk
4 cups heavy cream
1 1/2 cups granulated sugar
10 eggs
1 teaspoon vanilla extract
1 vanilla bean
In a medium-sized bowl, crack 10 eggs and beat lightly. In a large stockpot, combine sugar, milk and cream. Heat over medium heat just until bubbles start to form around the edges of the pan, whisking continuously. Using a large ladle, slowly add approximately 1/2 cup of the hot milk to the beaten eggs, whisking the egg while pouring it in. Repeat, adding 1/2 cup more hot milk to the eggs. Once the milk has been incorporated into the eggs, slowly pour the egg mixture into the stockpot, whisking to combine. Over medium-low to medium heat, continue to cook the mixture for another 7-8 minutes until it becomes thick, stirring continuously.
Remove the mixture from heat and allow to cool slightly. While it is cooling, split the vanilla bean down the center, and then, using a knife, scrape the seeds out. Stir the vanilla seeds and the extract into the gelato mixture. Refrigerate until completely chilled, four hours or overnight.
Once the gelato mixture has chilled, harden according to the manufacturer directions on your ice cream maker. Serve.


Food for My Family.