I’m starting a new series on picky eaters here on Food for My Family. I’ll look at different reasons kids might be picky eaters and how one approach doesn’t work for all children, and we’ll hear from other parents who may be going through similar trials to find out what worked for them and what didn’t to give you ideas on how to approach the subject with your kids. 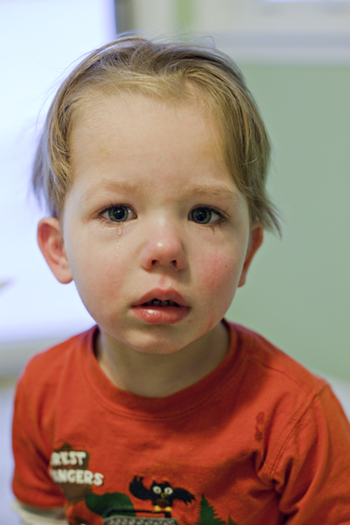 My youngest is a picky eater; however, I don’t like to call him that. So many children are pigeonholed by that term. Instead, let’s call him a particular eater.
Early on, Magnus (now 2 years old) decided that certain foods were to be detested. Cold cheese was the first thing we noticed him refusing. I had placed cheese cubes on his plate along with small grape pieces. He unassumingly plucked one up with his chubby sausage fingers and fumbled it towards his mouth.
The minute that cheese hit his tongue, he would revile, making the sourest of faces. His round little cheeks sucked in, and his little bird mouth opened and spat. I didn’t think much of it really, but it was after continuing to offer cheese in different meals and on its own that I realized he really did not appreciate the cheese that so many of us know and love (and many love it a bit too much, if you ask me).
The interesting thing about my small son’s aversion is that he will consume cheese in the right medium. For instance, if the cheese on pizza is nice and melty, he has no problem scarfing it down, but the minute that cheese begins to cool to a static solid, it is gingerly removed from the pizza and discarded off to the side.
It’s not only cheese that Magnus rejects, though. Just a few nights ago he was happily lapping down turkey and wild rice soup for dinner when he came to a larger chunk of cooked carrot. The carrot, perhaps because it was cut into a square and posing as cheese, was removed from his mouth and examined. Some nerve it had, occupying space in his wild rice soup.
With my oldest turning 11 in just two short months and my youngest currently navigating his way through “particular eating,” I thought it would be a good time to talk about picky eaters and what we’ve noticed as our four kids move through the different stages of childhood development and different stages of eating.
So, what would you like to see? What questions or issues should be addressed? Let me know in the comments!